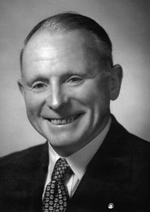 Sir Albert Coates is one of Ballarat's most distinguished sons and Federation University Australia is honoured to be able to collaborate with the Albert Coates Memorial Trust in organising an oration in his honour. The first Oration was delivered in 2001.

Albert Coates was born at Mt Pleasant. Leaving school at 11 years he worked as a butcher and apprentice bookbinder. During World War One Coates served as a medical orderly at Gallipoli. He was discharged from the Army on 21 February 1919, aged 24, and upon his return to Australia he put himself through medical school by working at night in the postal service. Within a year of graduating, he was appointed acting Professor of Anatomy at the University of Melbourne.

Aged 46, he volunteered for duty during World War II and on 17 March 1942 he became a prisoner of war at Padang Sumatra. He left Padang on 7 May as Medical Officer to a party being sent to Burma, and thereby became involved with the infamous Thai-Burma Railway. Hundreds of lives were saved by his surgical work during this time.

After returning to Australia Albert Coates became Senior Surgeon at the Royal Melbourne Hospital and Stewart Lecturer in Surgery at the University of Melbourne.

On 8 September 2006 the former Mt Helen Union Building was named the Albert Coates Complex. Members of the Coates family were present for the naming ceremony.

Federation University Australia together with the Albert Coates Memorial Trust, has the pleasure of welcoming the 2022 Albert Coates Orator:

In times of crisis: from Coates to COVID and Climate Change

The 2022 Oration will be held at Federation University's Mt Helen Campus, Wednesday 16 November from 5:45pm for a 6:00pm start - and will also be livestreamed for the very first time!