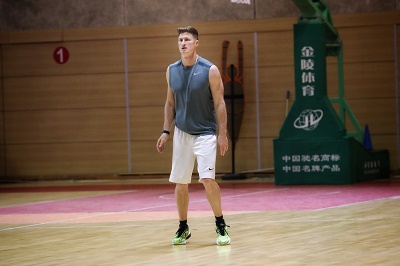 Bachelor of Exercise and Sports Science

Head of Strength and Conditioning

Can you please tell us about your new role?

I have been appointed Head of Strength and Conditioning. The position encompasses everything from design and implementation of the strength and conditioning program, leading and managing high performance staff employed by the club, and developing athlete monitoring and injury minimisation systems.

When did you move to China?

I moved to China in May 2019. I had travelled to China on three separate occasions prior to taking up the position with the Shanxi Basketball Club. I had previously visited the country as part of the pre-season campaign while employed by the Sydney Kings.

What are some career highlights from Sydney Kings, US Ski and Snowboard, Geelong Cats and St Josephs Football Club?

The highlight of my time with the Sydney Kings was being part of two pre-season games against NBA teams – one in Utah against the Jazz and the other in Hawaii against the LA Clippers. While working for the US Ski and Snowboard, I had the opportunity to live in a beautiful part of the world in Park City, Utah and work with Olympic gold medallists. The Geelong Football Club was a great organisation to work for. It had a great culture which was a true benchmark in professional sport. I also had the opportunity to work with many great people and practitioners who I learned plenty from. In the early days of my career at St Joseph’s Football Club, I was able to apply my knowledge in a practical setting, running a conditioning program for over 40 players. This was a great platform to develop my craft.

What attracted you to a career in exercise science?

Initially it was because I didn’t quite make it as a professional athlete. During that time, I figured working in the industry was the next best thing. This has now evolved into playing a role in the development of athletes. I see the role of a coach as being a selfless one, one that assists in facilitating both an individual and a team to reach their full potential.

What did you like most about your course and what memories do you have of university?

The most enjoyable part of the course was the practical element, along with the discussions that followed. I have never been the type to sit still with my head buried in a book so the studying was a challenge for me I must admit! I have fond memories of people that I met along the way. I am grateful for the assistance and guidance from lecturers and tutors including Oscar Owens, Dara Twomey, Warren Young and Scott Talpey. I have kept in contact with Scotty over the years, he is a great guy.

What are your long term career plans? Do you plan to stay overseas?

Long term, I am unsure where I will end up. My mindset since day one of this journey has been to take opportunities as they present themselves. That philosophy has taken me all over the world and one I am very grateful for. Where I will be working in five years from now, which organisation, or what country that will be, I’m not sure. I do know, that the time to settle and start a family is becoming more of a priority for me but I’m still enjoying this journey.