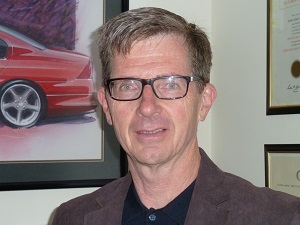 John Sullivan is a global automotive engineer who has spent his career designing motor vehicles concentrating on improving their safety performance. Graduating from the Gippsland Institute of Advanced Education in 1979 with a Bachelor of Engineering (Electro-Mechanical), he was among the first group of students to study the degree at GIAE, later completing a Master of Engineering Science.

John has played an important role in Australia in advocating and introducing advanced safety systems into locally produced cars. After graduation he commenced work with the Ford Motor Company in Geelong and worked in various roles in the Geelong and Melbourne offices before being recognised as having the potential to go right to the top of Ford globally.

Moving to the UK, John was Chief Engineer (body design) Ford Europe from 1998 to 2005, where he was responsible for the body and safety engineering systems of all Ford vehicles. Other roles with the company included Technical Director, International Operations for Ford, Jaguar and Volvo at the company's technical centre near London; Director Product Development, Asia Pacific and Africa based in Bangkok, Thailand; and Vehicle Line director, Global Small Car Segment Vehicles where he led development of the automaker's Fiesta and Kia models as well as other small car programs based at Ford's European technical centre near Cologne, Germany. John retired from Ford as Executive Director of Ford Asia Pacific before moving to Tata Motors, India’s largest car manufacturer, as Technical Director

With extensive technical expertise in the design and manufacturing of motor vehicles including their associated global processes, methods, tools and information structures, John’s career highlights include designing and delivering the first five star NCAP vehicle in Europe, the Ford Focus; the establishment of significant new Ford facilities in China and Thailand; and the development of four of Tata Motors’ new global cars.

John is a Chartered Engineer in the United Kingdom and a Fellow of the Institution of Mechanical Engineers, UK. He is non-executive Director UK Vehicle Certification Agency; Technical Director Wavetek battery technologies, Germany; and Industrial tutor with the University of Cambridge, UK.

In 2005 John was named in the Institution of Engineers Australia top 100 influential engineers list. Today John runs his own global engineering consultancy company specialising in optimising complex High Value Manufacturing (HVM) systems based out of London, UK. No doubt he will be involved in more innovations in the future.