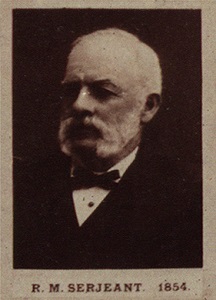 Certificate of Competency in Assaying

Robert Malachy Serjeant was one of Ballarat’s most successful mine operators and key public figures. Born in Cornwall in 1828 he arrived in Port Adelaide with his family in 1849 seeking his fortune and gained experience in the copper mines. Once gold was discovered in Victoria, Serjeant made his way to Forest Creek near Castlemaine where he and his partner were the first party to sink through the basalt in search of a deep lead.

In 1854 Serjeant moved to Ballarat to work as a miner and in 1855 was part of a group that discovered a 500-ounce nugget. With his share of the sale (around five year’s wages) he set himself up with the latest mining equipment including the first cast-iron puddling machine and iron sluice in Ballarat, as well as beginning a lifelong interest in the share market, and encouraging and supporting projects which encouraged employment in the depressed Ballarat mining industry of the time including the creation of a woollen mill which employed over 100 people. Around this time Serjeant became involved in politics. The first election for Parliament Representatives for Ballarat was in 1855. Robert stood for election for the first time in 1859, representing Ballarat West. He was also elected to represent Ballarat West in 1874 and 1880. In 1861 he gave up his parliamentary seat and turned to mine managing. In 1868 he became manager of Ballarat’s largest and richest gold mine, the Band of Hope and Albion Consols, a position he held until his retirement 30 years later when the company amalgamated with the Sir Henry Loch Mine.

Under Serjeant's stewardship the mine was a leader in mining, technology and the care of its workers, with Serjeant even paying the miners’ wages from his own pocket during hard times. He utilised his experience in geology and chemistry and his pioneering knowledge of deep lead mining to develop new and innovative mining methods for both quartz and deep lead mining. Miraculously he was able to administer simultaneously both deep lead and quartz mining with the Band of Hope yielding approximately 730,000 ounces of gold, paying dividends of over £1,000,000.

Serjeant’s community involvement extended to education and the development of the School of Mines, Ballarat (SMB), the first school of mines in Australia. The inaugural School Council was formed in 1870 with Serjeant as a member of the council. He held a position on the council until retirement in 1889 when he was elected a Life Governor. At the age of 42, Robert enrolled as a student at SMB where he obtained a Certificate of Competency in Assaying (including Metallurgy) in 1875. Serjeant was an active and generous supporter of SMB. As well as being a financial contributor, he lectured and examined in the Principles and Practice of Mining. He was regarded as an authority on alluvial and quartz mining. In 1887 he donated £256 to establish The R M Serjeant Scholarship for research into the treatment of complex auriferous ores. The award went unclaimed, and the fund was converted to the Serjeant scholarship in Mining Engineering which continued for nearly a century.

R M Serjeant was more than just a miner, he was a community man. His awards and distinctions were many. He was a Freemason, associated with the Old Colonist’s Association and the Ballarat Fine Art Gallery, member of the Ballarat Local Court and mining board, and a life member of the Mechanics Institute. He was also a Life Governor of the Ballarat Hospital. Serjeant died in 1902. In 2014 he was inducted into the Australian Prospectors and Miners Hall of Fame for his significant contribution to the mining industry, its communities and environment in Australia.