2019 International Alumnus of the Year 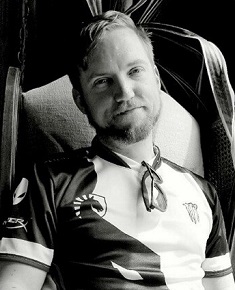 Samuel Mayo is at the forefront of competitive professional gaming and has worked for several games industry titans. He studied a Bachelor of Applied Computing at University of Ballarat, graduating in 2009.

As a direct result he gained a foothold in the competitive games development industry when he was offered a position with the company. There he quickly rose through the ranks before being offered a role at one of the world’s largest game development companies Electronic Arts. After three years he was transferred from the Melbourne office to work at the company’s global headquarters in San Francisco.

Following this Sam worked with a young company called Machine Zone trying to make its mark in the industry. His year with them saw the company build a stronger international brand and valued player base.

In 2015 Sam was approached by NVIDIA, a world leading technology hardware company forging its way into the growing field of eSports, one of the world’s fastest growing entertainment mediums featuring a wide range of different leagues with events filling stadiums and online broadcasts reaching tens of millions of viewers.

Sam is responsible for growing the brand presence in the market, organising events even to the point of conducting live broadcasts.