The Dekker family celebrated their son's graduation at FedUni in May 2017, following a long history of graduations for their family:-

The Dekker family believe their whole family owes its existence and tertiary education to at least three of the incarnations of what what is now known as FedUni.

Greta met her husband, Henk (then known by his first name of Cornelis) Dekker in 1970 at the Ballarat Institute of Advanced Education.  They were both studying a Diploma in Applied Physics.  In this days, most of the lecturers were in Lydiard Street as there was only one building on the current FedUni site.  They studied Engineering Materials and Engineering Drawing at the Mt Helen campus.  The campus contained a computer called 'George' that took up two floors in the building.  They would write code on a sheet, hand it in at the office in Lydiard Street, wait about a week for it to be sent out to Mt Helen to be transferred to cards by punch card typists.  The cards were then fed to George.  More often than note, Greta's came back with run errors. The physics lab was located in Lydiard Street.  It was a very small, with the majority being male students, headed by Lecturer, Bill Durrant. 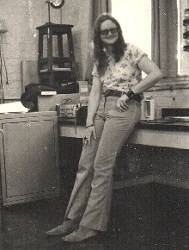 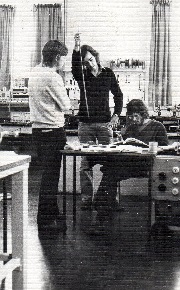 In 1973 Henk was one of the first group to be awarded a degree from the Ballarat Institute of Advanced Education (BIAE).  At that time the BIAE was affiliated with other tertiary facility and Henk travelled to Geelong for the graduation ceremony. 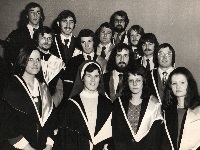 Henk Dekker is in the middle (left) 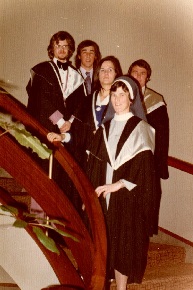 The group to the left were awarded a degree in physics or chemistry.

The group on the right are the physics graduates.  Henk Dekker is at the back.

Both Greta and Henk completed the Diploma in 1973 and were awarded it in 1974 in the presence of the then Head of the Ballarat Institute of Advanced Education, Jack Barker. 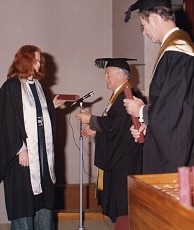 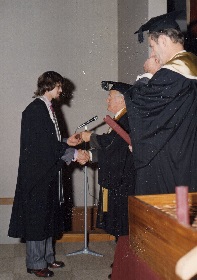 In 1975 Henk and Greta moved to Melbourne and were married.    Greta became a Maths/Science Teacher, finishing her career with 18 years at Ballarat High School.  Henk worked for a patent attorney business.  Three children later, they returned to the Ballarat district.

Henk decided to be a mechanic as a career change, which meant further involvement with our institution.  He undertook night school at the School of Mines Ballarat (SMB) to get his qualification.  His next career change involved computers, and completed a Graduate Diploma in Computing at the University of Ballarat.  He currently works as a programmer for Sparx Systems, Creswick. 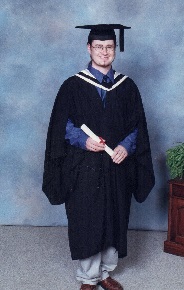 Their son Evan, completed a degree in computing at the
University of Ballarat and has worked for FedUni since he
graduated, completing honours along the way.

Geoff Boyd was one of the physics lecturers in the 1970's and at one stage,
was amused to know that he was lecturing an ex-student (Henk) at night
and our son (Evan) during the day. 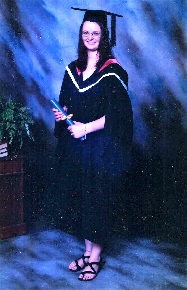 In May 2017 their youngest son Stefan received his degree in Mechanical Engineering. 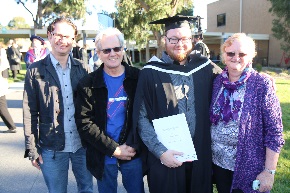 The Dekker family say that their family, their marriage, three children and now 3 grandchildren, owe their existence to what is now FedUni.