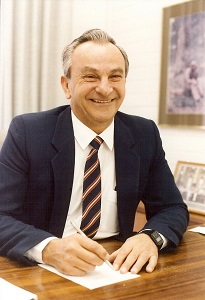 The Hon. Keith Hamilton’s long and distinguished career has been dedicated to the promotion and pursuit of excellence in education, public service as Mayor and Councillor of Morwell and in the Parliament of Victoria, and service to the community.

Graduating from the Ballarat Teachers’ College in 1955, Keith taught at primary schools, high schools and technical schools before taking up the position of Senior Lecturer in Physics at the Gippsland Institute of Advanced Education (GIAE) in 1968, a role he held for 20 years. During this time Keith furthered his education earning a Bachelor of Science, Diploma of Education and Master of Science (Physics) and was a member of the Australian Institute of Physics, American Physics Society, and the Australian X-ray Analytical Society.

In 1976 Keith began his career in public office when he was elected Councillor of the Morwell Shire serving until 1989. From 1983 to 1984 he was Shire President. Keith then served as the State Member for Morwell in the Victorian Legislative Assembly for 14 years from 1988 to 2002.

Keith has demonstrated extraordinary devotion to his duties through his service to the community. Known for his integrity and honesty he was of the firm belief that if serving on local council or parliament you were to serve the will of your constituents not your own personal views. His determination to do the best for his people resulted in dairy deregulation, and better water security for farmers with the Wimmera Mallee pipeline amongst other achievements.

Some of Keith's other major achievements have been in education, the Koorie community, and the environment. Keith's keen interest in equality saw him participating in Reconciliation, Sorry Day 2000, the Koorie Courts, 'Bringing Them Home' and the the Budj Bim Project (the Lake Condah Sustainable Development Project) that has seen this cultural landscape gain UNESCO world heritage status in July 2019.

Keith Hamilton’s leadership, integrity, courage, humility and compassion in his public positions have led to many innovations and advancements for the community and for the State of Victoria.