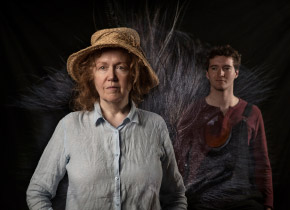 But soon she will be heading to Cohuna in northern Victoria to direct the popular new play Running with Emus by Merrilee Moss.

The story, set in two different time zones, is about the conflicts and dynamics that arise in a small town near the Murray River as it considers becoming a ‘Refugee Friendly Town’.

Two performances will be staged in Cohuna at 2:00pm and 6:00pm on Saturday 29 February. But they won’t be staged in a theatre. The shows will be held on the verandah of the Treetops Scout Hall, nine kilometres out of Cohuna on the edge of the Gunbower.

Running With Emus has been selected for the 2020 VCE List and the play will be published by Currency Press. The La Mama season in Melbourne opens on Wednesday 11 March and closes on Sunday 22 March.

Performances will be held on Wednesdays and Thursdays at 6:30pm, Friday and Saturday at 7:30pm.

The play runs for 90 minutes followed by a 20-minute after-show forum.

Cast members Sam Baxter and Elizabeth Sly will conduct workshops for the community on the Sunday following the performances.

Another cast member, Kevin Dee, graduated from the Arts Academy in the 1990s.

The productions in Cohuna and Melbourne promote the university’s commitment to civic and community engagement, expressed in the Strategic Plan 2018 – 2022: Transforming Lives and Enhancing Communities.

“I am so excited to direct the premiere production of this excellent new play, Running With Emus. It is a tragi-comic play about identity and what it is to be Australian in a multicultural world.

“The play reflects a global phenomenon about belonging and coping with change.”

“It is great to be working with Merrilee Moss again and also with Sam Baxter and Elizabeth Sly – two outstanding graduates from the Arts Academy.”