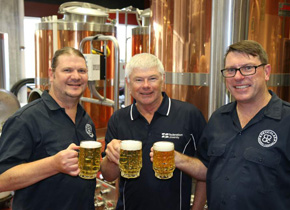 Ballarat’s best home brewers will take their hobby to the next level with a session on brewing at Federation University Australia.

As part of the Ballarat Beer Festival prize, the two winners will brew 500 litres of American Amber Ale that will go on sale at Ballarat’s Mallow Hotel.

“Brewing beer has never been as exciting as it is now, particularly with the wide variety of beers and the new ingredients being used.”

“The University has a very long brewing history and holds several short courses in brewing each year and also provides distance education programs.”

“Our graduates are entering a lucrative industry. Beer in Australia accounts for $16.5 billion a year in economic activity, which is about one per cent of Australia's GDP.”

“I have been brewing at home for the past 15 years and recently we’ve been experimenting with different styles and methods. We can brew up to 200 litres on our system, so it’s really exciting to produce our winning recipe at commercial scale.”

“It’s brilliant to have the opportunity to test our recipe on a commercial system. We look forward to working with Peter Aldred at Federation University, picking up many tips to improve, and seeing our beer on tap at the Ballarat Beer Festival and Mallow Hotel too.”