Putting a name to graduation day 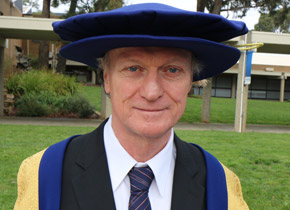 What’s in a name you might ask? Everything if you’re a nervous graduate about to cross the stage to receive your testamur on graduation day and your name is awkwardly or incorrectly pronounced.

With the changing landscape of tertiary education and the influx of more international students, the roll call presents a new degree of difficulty for anyone unfamiliar with the diverse cultures and pronunciations.

So spare a thought for the Esquire Bedell, a ceremonial officer of the University who presides over the ceremonies for the conferment of degrees.

Their role is to announce each student by name – or in many cases - names, with many international graduates having multiple names such as:

David Yost, Associate Professor of Mathematics at Federation University Australia, is one of several appointed Esquire Bedells in Australian universities. He has held the Esquire Bedell position for the past four years, and hasn’t missed a FedUni graduation ceremony, perfecting thousands of students’ names from dozens of different nationalities.

His faultless pronunciations are often acknowledged with rapturous applause from his audience, who both respect and appreciate his skills.

It’s no surprise that David is a seasoned traveller, having lived in eight countries and 10 cities including Thailand, Saudi Arabia, France, Italy, Spain, Germany and Scotland, before he and his wife settled in Ballarat.

His admits to never being any good at languages as a high school student. His linguistic skills developed in adulthood as the need arose.

Linguistics is the scientific study of language, and involves an analysis of language form, language meaning, and language in context. Linguists traditionally analyse human language by observing an interplay between sound and meaning.

“It was more out of necessity when I started traveling and lived abroad that I had to learn names and speak the different languages,” he said.  When he applied for a fellowship in Germany he ticked the ‘no’ box for language assistance. This was promptly overturned by the Humboldt Foundation who sent him on a two month course.

“I actually enjoyed it, and did well. I think it gave me just the right degree of motivation.”

David finds names from tonal languages such as Chinese and Vietnamese among the most difficult to interpret, despite their shortness. For long names, he says the secret is just breaking them down into syllables.

At a time when many Australian Universities are now hiring professional name readers to oversee the announcing duties at graduation ceremonies, Associate Professor Yost feels honoured to be in the role.

Students who register to attend the University’s graduation ceremonies are invited to supply a phonetic pronunciation of their names. But according to David, even this process is not failsafe. One student, with a relatively easy name to pronounce, went to great lengths encouraging the Esquire Bedell to practice – a lot.

“Try to pronounce these in one go as best as you can, but it's fine if you cannot. It can be pretty tricky. Practice and good luck.”(Graduating student 2018)

At a graduation ceremony years before he stepped into the role, the Faculty-appointed MC on the day inadvertently announced a student’s name as Angelina Jolie (much to the amusement of the forgiving audience and the graduating student, Angelina Kelly).

“Oh yes, understandable” he laughs. “In this role you have to concentrate. You simply can’t let your train of thought wander for a second from that long list of names.”

David Yost’s colleagues describe him as a calming influence on stage for the students anxiously waiting at the top of the stairs. He always makes eye contact with the graduates before eloquently reading their name.

“It is a very satisfying role and I believe a mark of respect by the University in terms of ensuring a memorable graduation experience, for all the right reasons,” he said.