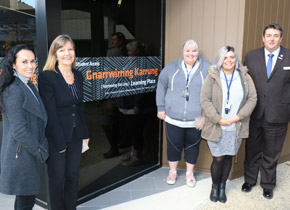 Federation University Australia’s Student Commons Area at the Mt Helen Campus is the first FedUni building to be officially given an Aboriginal name, Gnarrwirring Karung.

Meaning Learning Place in the local Wadawurrung language, the re-named centre (pronounced Narrowing Ker Ung) will provide recognition of the area’s cultural heritage and increase the vibrancy, diversity and rich culture throughout the campus.

“The official naming meets many elements recognised within the FedUni RAP such as enhancing community, embedding culture, providing opportunity and, most importantly, respect.

“The ceremony is a fine example of putting Aboriginal culture at the centre of our daily lives.”

Jasmine Graham, Manager of the Aboriginal Education Centre, said the re-naming was a milestone for the local Aboriginal community.

“The University is committed to greater recognition of Aboriginal heritage and culture throughout all of its campuses,” Ms Graham said.

“Gnarrwirring Karung will be an impressive landmark throughout the Mt Helen Campus and a welcoming learning place.”