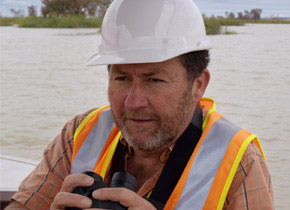 The first human impact on wetland ecosystems across the globe was earlier than estimated, according to new research.

Professor Peter Gell from Federation University Australia was one of 27 authors from 17 countries to publish the new research in The Anthropocene Review.

Published online this week, the article reveals evidence of the first human impact on wetland ecosystems across the globe.

“Many people might believe that human impact on the world’s lakes and wetlands is a relatively recent phenomenon,” co-author Peter Gell, a Professorial Research Fellow, said.

“Certainly, the so-called Great Acceleration of human impact on the planet’s ecosystems, and the emerging definition of The Anthropocene epoch, would suggest that human impact increased from the mid-20th century.

“Here however, we combine evidence from archaeology and sediment records from around the world to demonstrate considerable impacts arose from human activities from some time after they adopted sedentary lifestyles,” Professor Gell said.

“There is evidence of heavy metal pollution in lakes from around the world from several thousand years ago, and even examples of dangerous levels of contamination back then.

“The onset of erosion and nutrient release into wetlands, on account of humans, rather than climate, is also evident from several thousand years ago, not just in Europe but also in Africa and central and South America,” Professor Gell said.

“Across the northern hemisphere there is now evidence for early widespread oxygen depletion impacting aquatic fauna on account of the release of nutrients by human populations.

Professor Gell said Australia also had early impacts with even indigenous fish traps likely to have had localised impacts on wetlands.

“Here we also tend to focus on the types of human impact that remain in the memory and lose sight of the fact that our waterways have been impacted by pollution for over one hundred years,” Professor Gell said.

“Many of our wetlands were impacted by nutrients and sediments well before they became highly regulated.”

This analysis of global wetland change was undertaken by the Aquatic Transitions working group, led by Professor Gell and colleagues, which is part of Past Global Changes, a core project of the International Science Council’s Future Earth program.