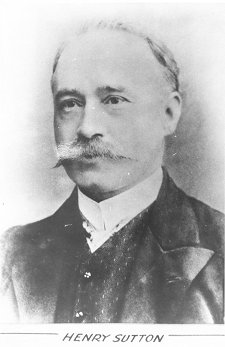 W.B Withers wrote of Sutton: "In the realm of science Ballarat has become of world-wide fame through the inventions by Mr Henry Sutton, a native of the place. His skill and acquirements in electricity, telegraphy, telephony, photography and also in astronomical and microscopal studies have won for him a high position as a practical scientist, and the credit is the greater as he is a self-taught student ... Mr Sutton, before he was fourteen years old, had read every book on science to be found in the library of the Ballarat Mechanics' Institute."

The Ballarat School of Mines (SMB) was fortunate to have this genius appointed as the lecturer-in-charge of the new Electricity and Magnetism department from 23 April 1883. Although Henry Sutton submitted his resignation to the Council of SMB in October 1884 it was resolved that he be asked to reconsider, and Mr Sutton continued to teach at SMB until the end of 1886. He was a prominent member of the Camera Club, and many of the other SMB clubs.

Sutton had an active and fertile brain, and was known for his inventions, especially his work on the telephone, telephane and carbon lamps. Sutton presented a vacuum pump, worked by water jet, for use in SMB Chemistry classes. His report of 1883 states: -A telephonic circuit has been laid down between the [SMB] engine-house and workshops, to be used for experimental purposes.'

Henry Sutton spent much thought on artificial flight, and made some interesting experimental studies with flying birds. The storage of electricity also attracted his attention, and, after much work and thought evolved the Sutton Secondary Battery. A paper on this battery was presented to the Royal Society, London, and was afterwards printed in the 'Transactions'.

Henry Sutton was granted a license by the Commonwealth Government to erect a wireless station at his Malvern home, where he would sit at his instrument and intercept long messages, or make his station the centre of a violent ether storm. At the time of his death the SMB Student's Magazine recorded: 'In the passing of Henry Sutton at the comparatively early age of 58, Ballarat has lost her greatest scientific inventor, and one of her most distinguished sons.'

Lorayne Branch, a descendant of Henry Sutton, has prepared the following list of Sutton's inventions and achievements:

This biography was researched by Clare Gervasoni, November 2005; updated in May 2009 with thanks to Lorayne Branch.

Image caption (left): Sutton's Music Store, Sturt Street Ballarat. Henry Sutton installed a telephone system into the family music store and at SMB. Both were most probably viewed by Alexander G. Bell when he visited Henry Sutton at Ballarat.

Image caption (lower right): Could this be a crude ammeter made by Henry Sutton or his students? In 1883 Sutton reported: -...The class has been unfortunately situated, by having to wait for instruments of precision ordered from England, but which have not come to hand. The delay has caused us to start constructing instruments, which it is hoped will bear favourable comparison with those of older date.'(Cat.No.016)