Dick Richards joined the Ballarat School of Mines (SMB) in 1914, and soon afterwards was granted leave to join an expedition to Antarctica. In 1915 he sailed from Australia with the Antarctic Exploration Expedition, led by Sir Ernest Shackleton.

Most Antarctic enthusiasts know of Ernest Shackleton's attempt to cross the continent, only to be thwarted by the sinking of the Endurance. Dick Richards was the physicist and sled manager for Shackleton's Ross Sea Party - with the task to meet Shackleton on the other side of the continent. When Shackleton planned his transcontinental crossing he decided to use supply depots as loads of supplies were too heavy to pull. The depots would enable Shackleton's party to carry just enough to reach the Pole, relying on the depots which were to be left by the Aurora's crew every 60 miles, stowed in 2 sledge journeys in 1915 and 1916. 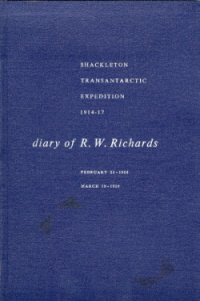 Dick Richards spent 3 freezing years in Antarctica between 1914 and 1917. Travelling south with Sir Ernest Shackleton Richards' worst experience was when his ship Aurora, tethered offshore, was blown away in a gale leaving Richards marooned for two years with nine other men on the ice floe. The expedition, consisting of two teams, were attempting to cross Antarctica from opposite sides, linking up somewhere near the middle. "That was with pretty poor equipment by today's standards, and we did not make it." (Dick Richards)

The Ross Sea Party arrived in McMurdo Sound aboard the Aurora in January 1915. The men planned to make two sledging trips to leave supply depots every 60 nautical miles to Mount Hope about 400 miles away. The going was tough as the sledges were overloaded. Temperatures were as low as minus 68F. In June 1916 the party crossed on foot to Cape Evans, occupied Scott's Hut (from his Terra Nova Expedition, erected in January 1911) in May 1915, for two months.

On 10 January 1917 Richards was hunting for seals when he saw a ship on the horizon. It was 'The Aurora'. Picking up the relieved survivors 'The Aurora' arrived in New Zealand on 9 February 1917 to a hero's welcome. Joyce, Wild, Hayward and Richards later won the Albert Medal for their heroic devotion to duty. Later an inlet on the Antarctic continent was named after Richards. Dick Richards wrote the following years after the ordeal "To me no undertaking carried through to conclusion is for nothing. And so I don't think of our struggle as futile. It was something the human spirit accomplished."

Prime Minister Bob Hawke wrote in 1984 'Your incredible journey of almost 2000 miles across the Antarctic Wastelands - involving some 9 months in the field with makeshift equipment - and you're adherence to duty in the face of enormous difficulty, suffering from scurvy, and the death of comrades, will; be an inspiration to your countrymen of the future as it is to us today."

After returning to Australia Dick Richards resumed his work at SMB as Lecturer in Physics and Mathematics, and developed many pieces of experimental equipment. During World War Two he acted as a scientific adviser in the production of optical apparatus in Australia. In 1946 he was appointed Principal and twelve years later he retired after a total of 44 years service.

Dick Richards has been honoured through the naming of a Ballarat School of Mines prize - The R.W. Richards Medal. This medal later became a University of Ballarat prize. It has been awarded annually since 1959 to the Bachelor of Applied Science graduate considered to have achieved the most outstanding academic performance of their course. The award was introduced to commemorate the long years of service to tertiary education in Ballarat by Mr Richards.

Winners of the prestigious medal are: 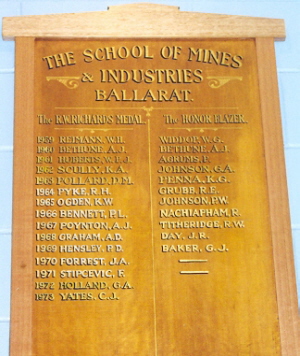