Historian and author
Foundation Chancellor of the University of Ballarat

Geoffrey Blainey, one of Australia's most eminent historians, was appointed the foundation Chancellor of the University of Ballarat (UB) in 1993 after an illustrious career at the University of Melbourne. He was installed as UB Chancellor in December 1994 and continued until 1998. The Blainey Auditorium at the Mt Helen Campus of UB is named in his honour. Blainey, always a keen exponent of libraries and the acquisition of books, has donated part of his extensive book collection to the UB library. In 2002 the honorary degree of Doctor of Letters was conferred on Blainey in recognition of his contribution to the University of Ballarat and to the community in general. 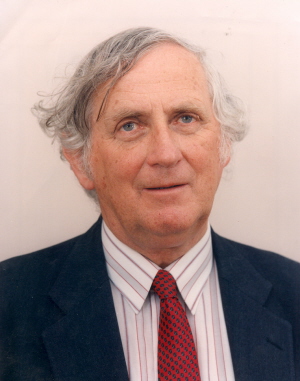 Educated at Ballarat High School, Blainey won a scholarship to Wesley College, before attending Melbourne University where he studied history. He worked as a freelance historical author writing mainly business histories such as The Peaks of Lyall; Gold and Paper; a History of the National Bank of Australasia; and Mines in the Spinifex. Blainey accepted a position at the University of Melbourne in 1962 in the Faculty of Economics and Commerce. He held the positions of Professor of Economic History (1968-77); Senior Lecturer 1962; and from 1977-1988 he occupied the Ernest Scott Chair of History at Melbourne University. Professor Blainey also held the chair of Australian studies at Harvard University.

As an economic historian, Blainey challenged the conventional view, questioning accepted contemporary understandings of European settlement of Australia as a convict nation, Aboriginal land rights, and Asian immigration. He is described as a 'courageous public intellectual, a writer with rare grace and a master storyteller'. In a reassessment of the life of Blainey, 'The Fuss that Never Ended' considers his ideas, his role in Australian history, politics and public life, and the controversies that surrounded him.

He was always popular with students. According to the Melbourne University home page 'When Geoffrey Blainey spoke to final-year students in the Friends of the Baillieu Library HSC Lectures in the 1970s, the Public Lecture Theatre was packed to capacity and his audience carried copies of his books to be signed, a tribute to what Geoffrey Bolton characterised as his "skills in interpreting technological change in admirably lucid narratives that appealed to both specialist and non-specialist audiences".

In 2000 Professor Blainey was awarded the Companion of the Order of Australia for service to academia, research and scholarship, and as a leader of public debate at the forefront of fundamental social and economic issues confronting the wider community. At that time the University's Vice-Chancellor Professor Kerry Cox said 'Geoffrey Blainey guided the new and inexperienced university through its first four years with a benevolent but firm hand. This time was challenging as the university strove to make a place for itself in higher education, grappled with funding cuts and the eventual merger with neighbouring TAFE institutes. For those at the university fortunate enough to work with Geoffrey Blainey during his time as Chancellor, they witnessed first hand his humility, and we are proud of his role in our history.'

In 2002 the degree of Doctor of Letters was conferred on Professor Blainey in recognition of his contribution to the University of Ballarat and the community in general. The same year Blainey donated a collection of material to the University of Ballarat. Included in this collection are historical books, papers and other material relating to the early history of mining and the central Victorian goldfields. A second generous donation of material was received in 2005. 'The Geoffrey Blainey Mining Collection' is located at the E.J. Barker Library, Mt Helen, and can be accessed Monday to Friday, under supervision.

Image Caption (LHS): Programme for the Installation of the University of Ballarat Foundation Chancellor, Emeritus Professor Geoffrey Blainey, AO, which took place on 2 December 1994. (Cat. No. 6340)