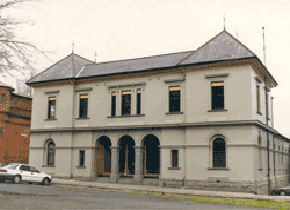 Usually court houses had a public gallery and a central court room of two stories high, flanked by the offices for magistrates and clerks. The importance of the Ballarat Supreme Court is shown by the fact that the flanking wings are also two-story, and their hipped roofs (each with weather vanes) differentiates this building from other Public Works designs.

The building is substantially intact apart from the removal of the front chimneys and minor alterations to the side and rear.

The building is composed of two flanking pavilions with a recessed central portion containing a ground floor arcade loggia and with ground floor arched windows, rectangular hooded windows on the upper floor (with original blind hooks) with a central tripartite window. Today the building is used as a performing arts centre.