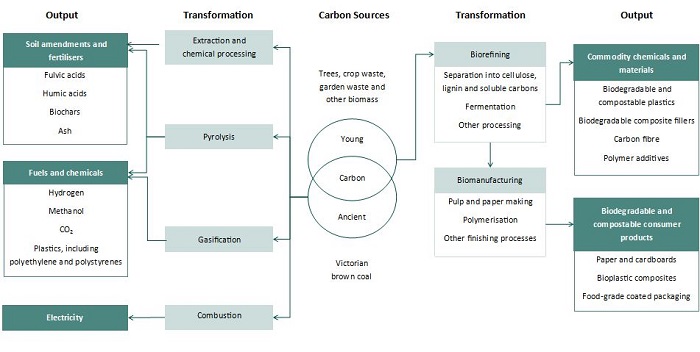 The centre of the diagram shows how young and ancient carbon overlap as key resources for the CTRG. Adding value to carbon resources occurs in two ways: through chemical extraction and processing, and biomanufacturing.

The left side of the diagram explains how ancient carbons such as coal are more suited to thermal processing and are thus transformed by chemical extraction and processing. Pyrolysis and extraction and chemical processing produces biochars, ash and soil amendments of fulvic and humic acids. Pyrolysis and gasification can lead to fuels and chemical such as hydrogen, methanal, carbon dioxide and polymers. Finally, combustion leads to electricity. Subsequently, carbon is at the very centre of the CTRG because of its ability to be used in such diverse ways. 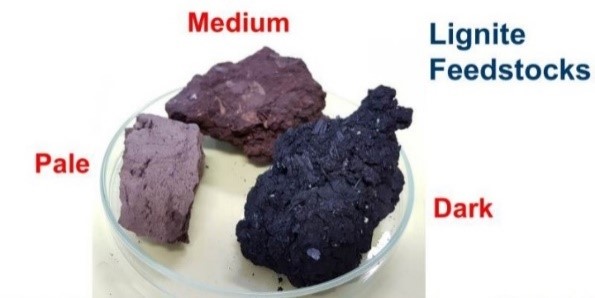 CO2 is an inevitable product when using carbon resources to produce energy – we even produce CO2 from the food we eat. PCC (post-combustion CO2 capture) has the potential to reduce the economic and social costs of the transition from traditional energy production (especially fossil-fuel combustion) to newer, renewable energy sources. More recently, PCC is being discussed as a way to actively remove CO2 from the atmosphere. The CTRG contributed to global research efforts to understand possible difficulties with adapting PCC technology to coal-fired power stations. Commercial-scale PCC is now operating successfully at a Canadian coal-fired power station and more information can be found here: https://ccsknowledge.com/.

These are some of the ways the CTRG sees carbon-based industries evolving into the future. We are interested in considering and expanding ideas around economic and environmental sustainability and hope to continue working with organisations such as the ACI and CSIRO in these areas.