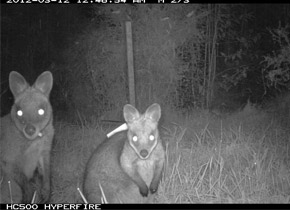 Assessing the quality of a habitat for the release of a rehabilitated animal can be very complex and requires training and knowledge of fields that may not be within the scope of many wildlife carers. A recently completed research project by Sharon Reid focused on finding a simpler method for assessing appropriate release sites for rehabilitated wildlife in Victoria. Motion-activated cameras and habitat survey techniques newly developed by the Department of Environment, Land, Water and Planning (DELWP) were used to investigate habitat quality for arboreal and terrestrial fauna including possums, kangaroos, wallabies and wombats.

Wildlife rehabilitators, in collaboration with DELWP wildlife officers, often have to select release sites for rehabilitated animals when release back to their site of origin is not practical or possible. The presence of animals of the same species in conjunction with habitat quality have been identified as key parameters that greatly influence the survival of animals after translocation, however assessment of habitat quality is a complex task that is beyond the scope of wildlife carers due to experience and time constraints. 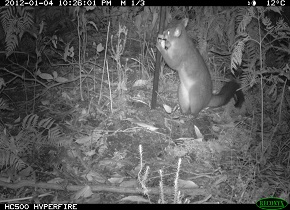 Sharon’s research explored whether the fire history of a given area offers a good indication of habitat quality for many commonly relocated wildlife species, with the overall aim of simplifying release site selection by wildlife carers and DELWP officers. Habitat and fauna surveys were performed in lowland forest around the Latrobe Valley using camera trap technology, spotlighting and new habitat survey techniques developed by the DELWP. Wildlife carers were also surveyed to determine current priorities in the selection of fauna release sites.

An effective method for simplifying habitat quality assessment was not found in this particular study, however several areas for future research were highlighted including post-release monitoring of rehabilitated animals. Higher rates of post-release monitoring could provide wildlife care organisations with information that may facilitate better survival outcomes for rehabilitated fauna. 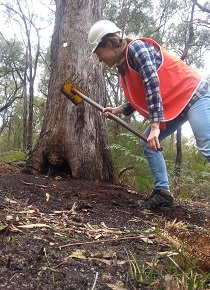 Honours student Emily Cordy is working in collaboration with the Victorian Government Department of Environment, Land, Water and Planning (DELWP) to protect hollow-bearing trees during planned burns. Natural tree hollows take many decades to form in Australia and are essential for breeding and shelter for many of our native wildlife species. This study is investigating whether the clearing of combustible material in the zone immediately around the base of a hollow bearing tree offers protection from planned fire. If this research is deemed significant, it will be used in the planned burning regime managed by DELWP to better conserve this important ecological asset.

Hollows valuable to native wildlife are found predominantly in mature and dead trees, and are formed over many decades by fire, termites and time. These cavities can range in size from centimetres to several metres in length and width and host a variety of life including reptiles, birds and mammals. Whilst fire can contribute to the formation of hollows, it can also destroy them, and techniques are being developed to ensure regeneration burning regimes impact as little as possible on these ecologically valuable trees. 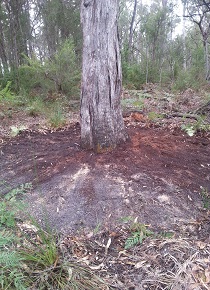 Emily’s research focuses on how physical fuel removal around typical hollow-bearing trees affects their survival during a planned burn. To do this, relevant trees are identified in a given burn area and each is marked with a fireproof tag and its GPS coordinates recorded. The area immediately surrounding the tree is then cleared to mineral earth, where no combustible material remains. Clearing size is varied among trees to determine just how much space is required to effectively protect them. The fuel-reduction burn is then performed as planned and once it is safe to do so, Emily returns to the site to examine the trees. Locating the trees is sometimes problematic as they may be totally burned to ash, however it is made possible using GPS mapping and tag identification.

Critically endangered species that rely on tree hollows, such as the Leadbeaters Possum (Gymnobelideus leadbeateri), cannot support any further population losses. Regeneration burns have been identified as a potential threat to such species, due to their potential to destroy the mammal’s natural habitat. When this research is completed, it can be used by the DELWP and CFA to preserve hollow-bearing trees and their resident fauna during planned burns, which will greatly improve conservation outcomes for affected species.