Birds at home and afar 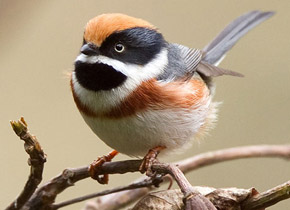 Associate Professor Wendy Wright is working to assess ecosystem health in a highly modified river valley in the Chinese province of Sichuan. This research is investigating the effect that introduced plants, farming and deforestation have had on the avifauna in the valley and the ecosystems they inhabit. The findings of this project will be used to inform revegetation efforts in the area.

The forests of the Lower Jinsha Valley were cleared long ago for farmland. The removal of native vegetation has destabilised the steep slopes of the valley leaving them prone to extensive erosion. In the 1980’s, some of the steepest areas were revegetated in order to stabilise the slopes. The introduced plant Leucaena leucocephala was used for this purpose and patches of forest comprised only of this species are now common throughout the valley. 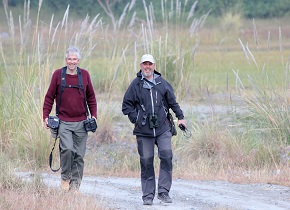 Wendy has documented the number and species of birds in the three distinct habitat types present in the valley - farmland, remnant forest and Leucaena forest. Surveys were performed over a number of years, and involve slowly moving through the habitat and looking and listening for birds. Photography and recordings of bird song were used to assist with species identification, and Sid Francis, an expert in Sichuanese bird fauna, was enlisted to help with this task.

The research found that remnant patches of natural forest containing local plant species are extremely important in maintaining the diversity of bird species in the area. Such areas support specialist forest birds that are absent from the other habitat types. Leucaena forests were found to support very few bird species, indicating they do not provide a suitable habitat for the majority of native avifauna.

When completed, this research will provide an understanding of the effectiveness of current and previous restoration programs, and can be used to make improvements to future projects. The results of this work will greatly improve the conservation of bird species and biodiversity in the Lower Jinsha Valley, and can be applied to other river valley systems in the Sichuan province to improve conservation outcomes.

Investigating the distribution and movement of Victorian Brolgas 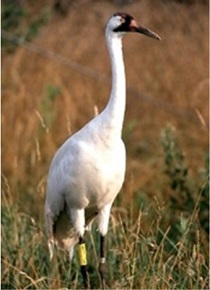 Dr. Simon Cook is supervising PhD research on the south-west Victorian brolga population, developing innovative methods to study these large birds. The natural range of these birds covers a region where there is increasing wind farm development, and little is currently known about the impact of turbines and power lines on brolga welfare. For the first time, satellite transmitters have been fitted to brolgas, providing previously unknown insight into the behaviour and range of the south-western Victorian brolga population.

Brolga capture is a labour intensive and time consuming process, and as this study is the first of its kind, researchers have had to develop an effective method by which these large birds can be caught. The birds must first be lured to the capture site; this is achieved using a dummy bird and playing recorded brolga calls. Once captured, a backpack-style satellite transmitter is attached to the bird - this transmitter is designed so that natural movement and behaviour is unaffected. The transmitter broadcasts information on the daily movement of the subject for up to three years before it biodegrades and falls off the bird. 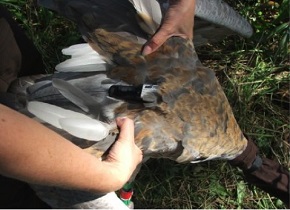 The south-west Victorian brolga population is thought to be in decline, however little is known about the behaviour of these scarce birds. Using data from the transmitters, this research has already uncovered information on the range and movement of these birds, with some moving over 100 kilometres in a day. Flocking sites where these birds congregate have also been identified, resulting in a better understanding of the breeding success of this population. This research will be used to provide recommendations to the Victorian wind energy industry, and can be applied to mitigate any potential impacts wind farming might have on this species.