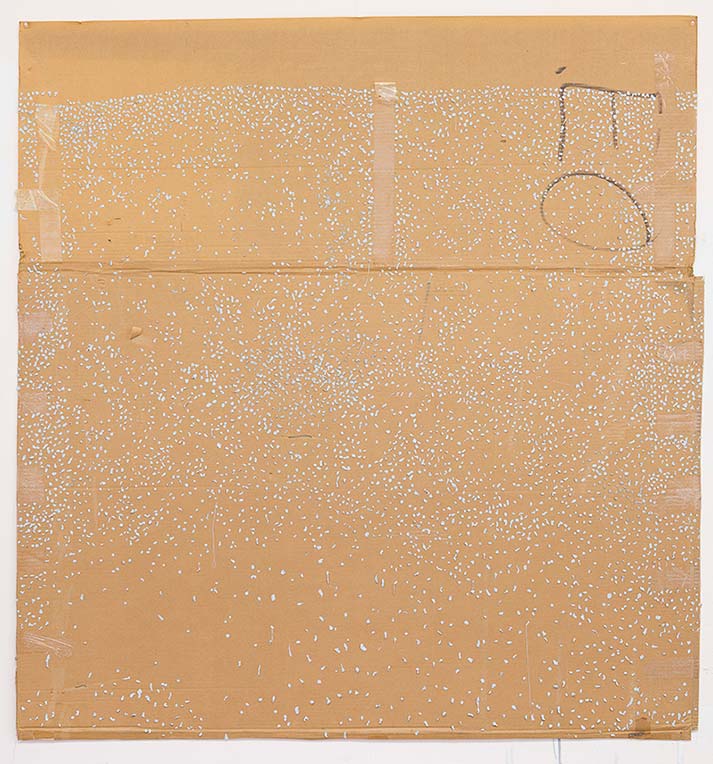 Teelah George's practice looks at archival information and processes as a way to examine the relationship between narrative and representation, excavating the parallel ambiguities in both historical record and visual art. Cultural artefact, oral, written and photographic information become the departure point for her research, looking at both personal and historical narratives to present alternate manifestations and contexts.

Working across painting, sculpture, drawing and installation, these processes are adapted and expanded through an experimental approach to material and conceptual relationships. In the studio, Teelah considers herself a facilitator, bringing things together and allowing the inherent material properties to initiate the process. Work may begin as a glitch: paint spilled on photographs, a clump of Blu Tack and stained aluminium foil all become potentialities for visual outcome and ideas. This close, yet peripheral observation expands upon the negative spaces formed by memory and process, employing the often-entropic qualities and contexts of materials as part of a larger dialogue.

Using studio refuse, destroyed works and packaging materials, Teelah's art practice has a cyclical momentum, continuously cannibalising her ideas in an effort to expose something previously unseen. Personal, contemporary and historical narratives are enmeshed and recycled, adding and removing layers as a way to fracture concrete narratives. This is a process that allows for interpretation, and like 'Chinese Whispers' forms a continuous and evolving history that is at once transitory and perpetually affecting.

Teelah George's new work, Picking rocks, is part of an ongoing investigation of materials and narratives within archival frameworks. Informed by research into Permanent Collections, including the Cruthers Collection of Women's Art and the Art Gallery of Western Australia, this work subverts conventional notions of what is collected and identifies the inevitability of change within both the ideology and physical composition of a collection.

Comprised of small clumps of Blu Tack placed on found cardboard, as dictated by Teelah's height and proximity, the pieces of tack are added and removed, forming both dense and sparse areas that trace her movement during the making process. At close proximity, the forms are identifiable as pieces of all too familiar Blu Tack, however from a distance, the work becomes something else - a textural plane or a landscape.

The title, Picking rocks, is suggestive of both landscape and process and makes reference to Teelah George's time spent collecting rocks on the family property of her childhood. However, the rocks were intended material for the construction of a house that, despite these efforts, was never actually built. The action, of placing and removing the tack, represents a similar Sisyphean effort, driven by a persistent pursuit and constant questioning.