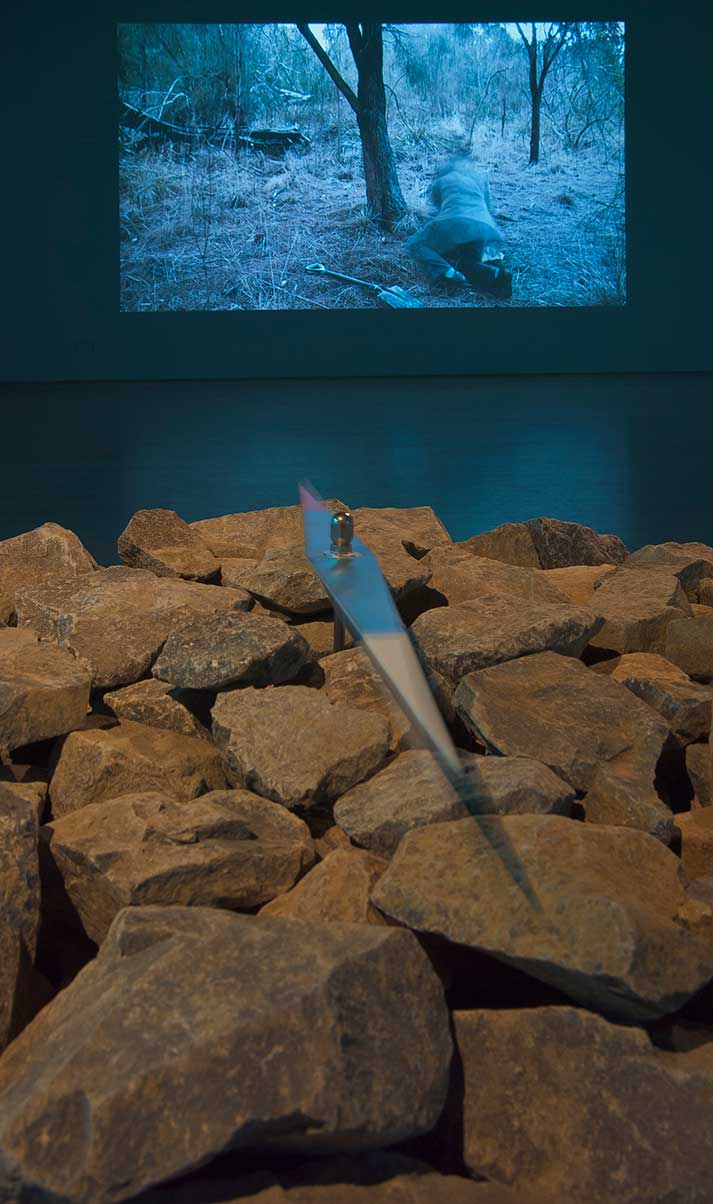 Much of Julie Gough's work explores notions of loss and absence. Film provides the mechanics of duration to her imaginings. Engrossed in uncovering what has transpired, often at places significant to her ancestors, Gough's work simultaneously documents actions of retrieval, and the means, through art, of reconnection.

Recent artworks by Gough - Oblivion, Traveller, The Lost World (part 1), The Lost World (part 2), TAHO LC347, ODE (2013-2014) explore the power of storytelling through video footage of herself and family members recounting events or undertaking journeys. These investigative pieces take a viewer, and its protagonist/s, through or to place across time, with the object/motivation for the works often drawn from the colonial past. The resulting projection/screened footage is sometimes installed with an object(s) associated with the narrative, as a kind of evidential residue of the activity, or the project's precursor and instigator. Each work is stand-alone and peculiarly different from another, yet they become serial echoes; their sense of purposeful undertaking and intrinsic uncertainty of where or with what the journey/film will conclude is a compelling methodology.

For the Guirguis New Art Prize 2015, Gough has produced a new intimate video work, The Gathering which is partnered with made and found objects as her process of continuum and of openly questioning the role of the past in the present by making investigatory footage linking places, events and people with archival documents and found objects.

The intention of The Gathering is to enliven the past for a contemporary audience-viewer by reuniting historic elements currently alienated from each other in the world. In the gallery space the exhibited objects, text, historic records, landscapes and people fluctuate between film and object representation. Gough's intention is to enable an alliance of new meaning to develop from the multi dimensional dynamism of their attempted unification.

The title The Gathering intimates an otherworldly assembly and an atmosphere of pseudo paranormal channelling resonating in the work. Is the exhibit a diorama from the Victoria era, or an abandoned laboratory? Does the work reference Conan Doyle or early modern archaeology? Is the artist genuinely undertaking fieldwork or critiquing it? Reconstructing the past from withheld and dispersed fragments the artist reveals her trials and attempts through various means of production and arrangement. The resultant work is a taxonomy about Gough's perpetual pursuit of the elusive past, a quest that she terms 'The Impossible Return'. This desire to know and embody, even temporarily, what was wrought from her Aboriginal ancestors, is as Gough acknowledges, not only impossible but intolerable and here Art offers both outlet and exposure for an otherwise transfixed state of recollection.