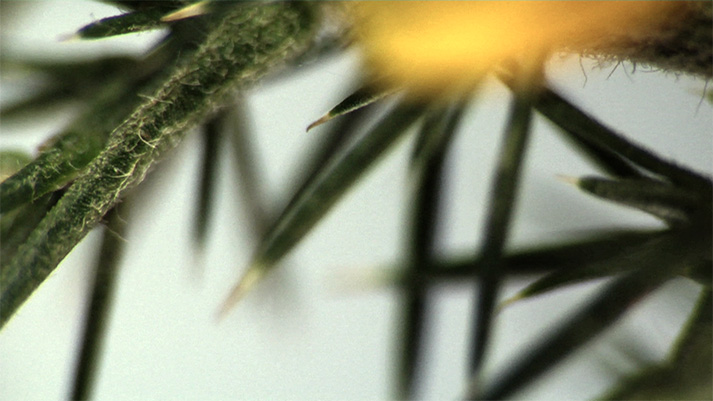 'Weeding' is a three-screen video installation, taking the plant Gorse as its subject. The work combines three existing trajectories: narratives of place, botanical studies of signature species and performance.

In this project, Redfern clears and documents an area of Gorse infestation along a section of the Canadian Creek that runs through Golden Point, close to the place where gold was first discovered in Ballarat. The site is significant in Ballarat's history and origins in the colonial period and Gorse, as an introduced specie, allegorises and evokes those early encroachments by non-indigenous people, plants and animals in the area. Appearing to take place over the course of a day, the work culminates in a burning of Gorse at sunset - a conflagration presented across three main screens.

In 'Weeding' Redfern explores Gorse as the primary weed of significance in the Ballarat region and, like so many of our problem plants, the way in which the British, wanting a reminder of home, purposely introduced it for use as a hedge and ornamental. The work also examines weeds, exotics, invasives or 'introduced species' similar to Gorse and how they occupy a special place in the Australian psyche, emerging as a concern from the earliest days of Australia's colonisation, post WWII and the treatment and the war on weeds that emerged as we moved to the suburbs and began to cultivate native gardens in greater numbers suggesting part of an embrace of our unique flora and a shirking of the cultural cringe as post-war generations grew in confidence.

'Weeding' also suggests 'white-fella' guilt and 'us' as the 'invasives' and that weeds can serve to remind us of the vexed history of settler societies. Here Redfern examines our current historical moment concerning bio-diversity as a key concern and indicator of global change and the way that weeds are an important element in that story, representing the colonising influence of humanity across the globe and the transportation of non-native species into environments where they threaten local species and so reduce bio-diversity.

Conversely, Redfern also examines weeds as simply plants that we don't want and that 'Weed' is not a scientific term but a cultural one with prominent voices, like Peter Andrews and David Holmgren, constantly speaking out defending the proliferation of weeds as a productive element in the fight to restore soils and protect the environments in Australia. Further complicating this picture, Redfern also exposes Gorse as a legume and as such the way it fixes nitrogen in the soil. and as a major element in the global warming story, while also posing Gorse as possibly neither a good or bad thing and simply a life form occupying its ecological niche, just like human beings - similarly successful and pervasive.

'Weeding' uses these contradictory ideas about Gorse as a departure point for a video installation that addresses the thorny problem of the irreversibility of changes made to the Australian ecosystem whilst simultaneously problematising our attitudes by privileging the beauty, and innocence, of Gorse.