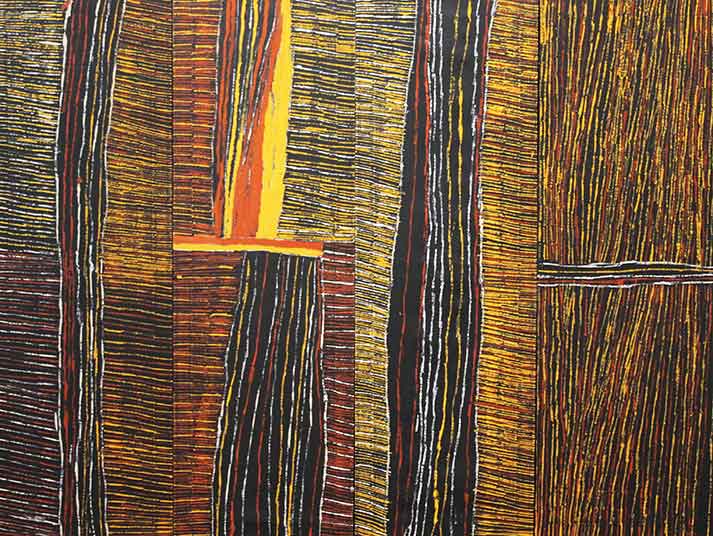 Conrad Tipungwuti is a traditional Tiwi man and artist whose understanding of the world is shaped by observation and by constant watching, more than by self-aggrandising participation. Spending long periods outside at night, Conrad constantly walks the community and the surrounding bush and shore. Having never made his way in the world of words, his vocabulary is expressed visually in charade-like sign pictures, distilled in paint in an expressive style, holding a particular freshness and energy.

As reflections of the Tiwi landscape and the country surrounding Milikapiti, Tipungwuti's works suggest the reduplicative nature of the country's patterns and the forms of the sea, land and sky. His work also reflects his internal world as painted marks to reply to the landscape's impact upon him and ward off the turbulences of community life.

Conrad Tipungwuti paints in the traditional Tiwi body style using a wooden comb "pwoja" or "kayimwagakimi made from ironwood, also used to paint on the body for ceremony, on pukumani poles and on bark with natural ochres collected from the surrounding area.

Conrad Tipungwuti's practice has developed with unique characteristics - full of expression with a freshness and energy embodying the sheer enjoyment of the very act of painting.