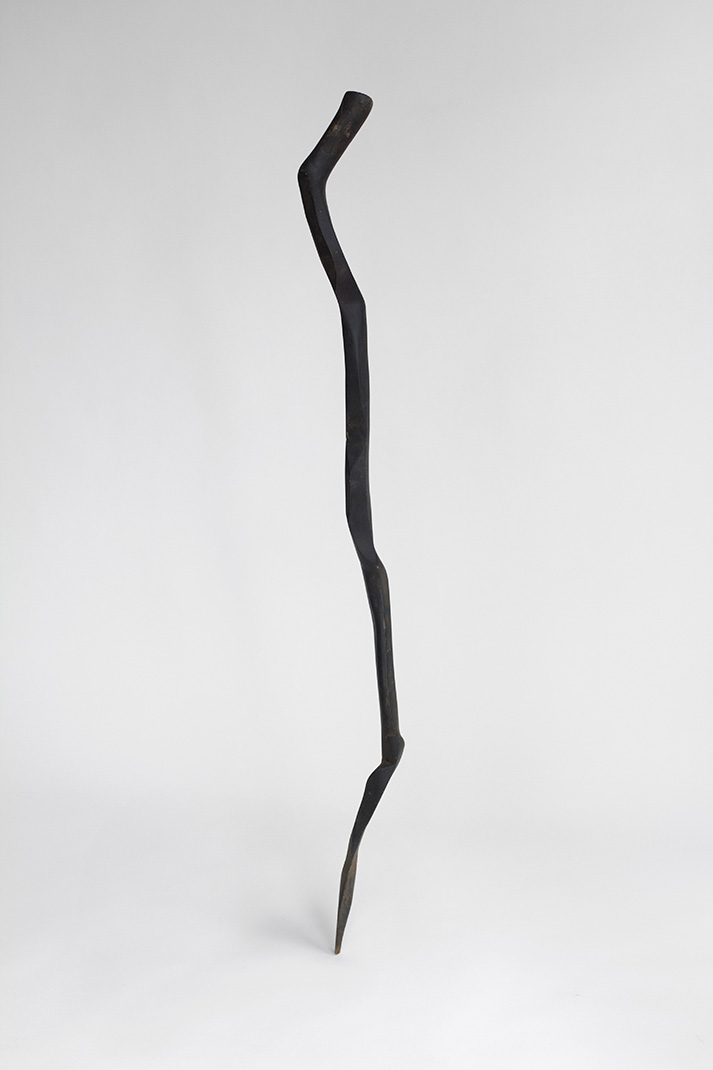 In Bond's new work, The Devil's Spit, the creative energy of five invented artists is channelled from within the confines of a fictional narrative.

In March 1963, in an isolated paddock in Dean, just north of Ballarat, a group of five artists stood staring at a blackened, rock strewn landscape. They'd been drawn to the area by a journal article describing the scientific discovery of what locals had long called The Devil's Spit, a thirty metre stretch of black obsidian rock formed by prehistoric lava flows. Led by fraternal twins Ruth and Des Sewell, together with Peter Varga, Gloria Haines and Ian Haas, they spent the next year living in a caravan positioned directly over the obsidian in the hope of absorbing what Ruth termed 'ecstatic dark matter', spending much of that time crafting objects to be used in elaborate nightly rituals.

Sometime in early 1964 the five artists vanished, along with all traces of The Devil's Spit. All that remained was their caravan, discovered in the early 1970s by local landowners some five kilometres away, mired in the muddy river bed of Birch Creek. Inside the rotting, rusting hulk they found home-made ceremonial paraphernalia, sculptural assemblages, carved pieces of obsidian, household items and books, all of which were recovered and stored by Victoria Police's Missing Persons Unit until their repatriation to members of the Sewell family in the 1980s.

Chris Bond's The Devil's Spit is a curated selection of these remnants, organised into a museum-like installation that speaks of decay, failure, and uncertainty. The included objects and introductory plaque provoke an unstable balance of knowing and unknowing, dissolving distinctions between fact and fiction, authenticity and deception.

Bond has long been an advocate of fictional play, a technique that allows him to inhabit the bodies and minds of invented artists and writers as a means to create new work. Within this generative methodology, he employs pseudonym, identity simulation and self-deception in order to side-step self-conditioned responses to ideas, materials, and forms.

The process of fictional play demands a suspension or displacement of the self. It opens a psychological space where an artist can function as an actor within their own work, permitting a freedom of thinking and expression that allows them to discover, unleash and perform an imagined capacity for multiple positions and unconditional approaches.

The Devil's Spit activates this methodology. Within the work, Bond has constructed identities for each of the five artists, acting out their imagined personae in order to make objects on their behalf. These items exist in the installation as props, and in the absence of any other form of supporting documentation, they carry the ambiguity and credibility of the narrative entirely on their own.

With the methodology in hand, Bond is interested in the potential of these objects to operate outside of the narrative in which they were invented, to push into an area where an evaluation of their formal qualities might grant them some form of autonomy.

Chris Bond talks about his work The Devil's Spit. (audio) (transcript in Word)