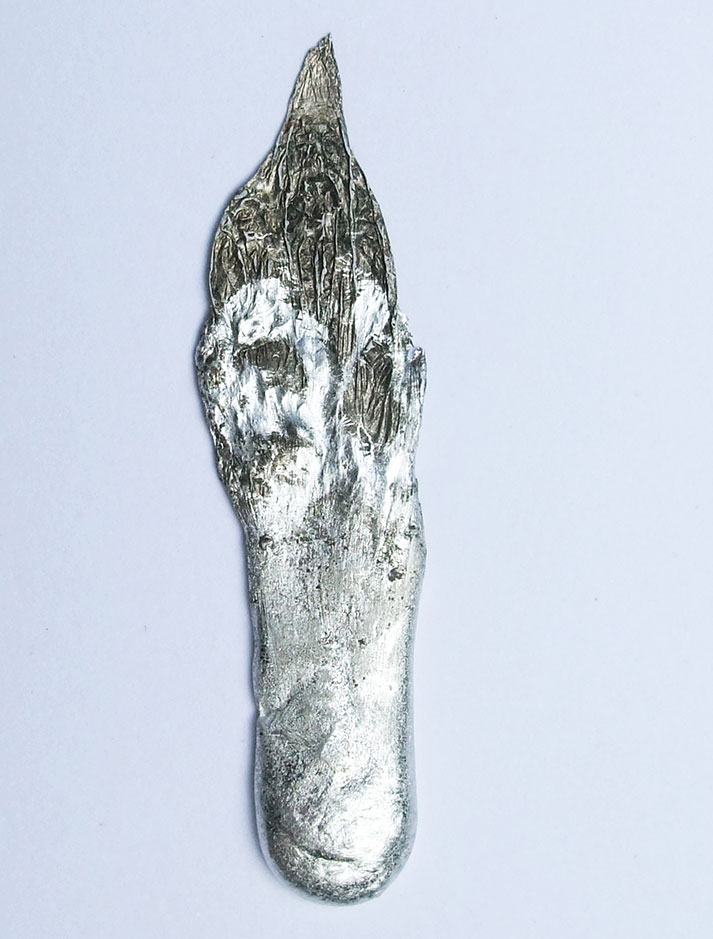 Susan Jacobs engages with latent potential inherent in the materials, spaces and contexts she responds to. Discursive research and material experimentation inform her practice, which encourages lateral associations to be drawn between diverse forms and ideas, inviting chance and the unforeseen to direct her process-driven approach. Through drawing, sculpture, video and site-responsive installation, Jacobs' work considers the nuances of physical forces, energies and elemental properties in relation to psychological and spatial dynamics.

This new work takes the idea of prospects as it's starting point, considering how the varied applications of the term may be woven through one another. The sense of possibility or anticipation of a future event, the act of searching and the idea of a point of view, outlook or perspective are teased out materially and spatially.

A miniature wizard is cast in Gallium, a silver-grey metal with a low melting point known as one of 'the poor metals'. The tables are turned on the wizard as he is made subject to a fate of transformation akin to his own capabilities as a symbol of power. The heroic figure is reduced to an amorphous blob as it melts in the palm of a hand. A trickle-down effect of heat and change is triggered in that the static nature of the video image has the potential to burn itself into the plasma screen over time.

The process of melting recalls the practice of Molybdomancy, an ancient method of divination involving molten lead or tin thrown into water to form random shapes as the hot metal cooled, to be interpreted as prophetic devices. Subtle movements of the hand evoke Ideo-motor Phenomenon (psychological or subconscious bodily responses sceptically attributed to practices such as dowsing and table turning).

Jacob's new work Prospects considers logical fallacies which highlight tendencies in human cognition to interpret patterns and meaning where none actually exist. It calls on sculpture to play out schisms between pseudoscience and scepticism. Conflating polarised ideals and definitive points of view through space and material, Prospects suggests the psychological drives underpinning the impulse to control or resist being at the mercy of uncertain forces.