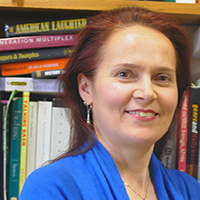 This wide range of experience is reflected in Lesley’s research, which is published in Australia, the United States and the United Kingdom. Her research is required reading in tertiary courses internationally. Her publications include the books Australian Comedy Films of the 1930s: Modernity, the Urban and the International and Clueless: American Youth in the 1990s. In 2010, Lesley was a Scholar in Residence at the National Film and Sound Archive of Australia. She is a peer reviewer for journals, has contributed her expertise to the Melbourne International Film Festival, and has been a judge in the ATOM (Australian Teachers of Media) Awards for several years.

Lesley’s work includes an emphasis on popular screen texts, extending to areas of digital media, exploitation film, genre-mixing and independent screen media. Her research often centres on social aspects of screen texts, including their relationships to social contexts, public discourse and historical shifts as well as production and reception contexts. Her major research projects have focused on comedy and youth culture. However, the ideas underpinning her research are often as much about relationships between screen texts and society as they are about specific genres. Lesley’s research interests can be encompassed by the following areas.

Lesley’s research about teen comedy and Australian comedy focuses on social aspects of popular genres. Although often not taken seriously, comedy serves important social functions through having a capacity to challenge conceptions of the existing world, explore challenging ideas and envisage developments that have not yet occurred. Lesley’s research about comedy explores differences of gender, ethnicity and class. She has demonstrated how early comedy films reflect on shifting social relationships in interwar and contemporary Australia. This in turn forms a basis for understanding later and contemporary developments in screen comedy.

Lesley’s research encompasses ways in which narratives are fundamentally shaped by social contexts and can engage in public discourse. Ways in which screen productions are implicated in the circulation and shifting of ideas and discourses pervade her work about historical developments in comedy and youth culture, historical exploitation films, genre-mixing and contemporary media. Forms of digital media, television and film are rich areas for examining values, attitudes and experiences of social shifts that can be understood as local and international, generational and historical.

The significance of ideas of value in relation to screen media is a recurrent element of Lesley’s research. Ideas and frameworks of value are important for understanding relationships between popular genres and their contexts of production and reception. Lesley’s research examines screen media in relation to shifting cultural landscapes in which genres that are maligned or commonly overlooked can be understood as barometers of popular awareness, topical issues and shifting social values.

Cale Hellyer – “Fulcian Incubi: The Nightmarish Depiction of Children and Youth in the Films of Lucio Fulci” – Principal Supervisor

Speed, Lesley. Australian comedy films of the 1930s: Modernity, the urban and the international. St Kilda: Australian Teachers of Media, 2015. The Moving Image 13.

Speed, Lesley. “Prurient exuberance: early Australian sex hygiene films and the origins of Ozploitation”. Screening the Past, no. 42, 4 October 2017.

Speed, Lesley. “‘In the best film star tradition’: Claire Adams and Mooramong”. Screening the Past, no. 39, August 2015.

Speed, Lesley. “Strike Me Lucky: Social difference and consumer culture in Roy Rene’s only film.” Screening the Past, no. 26, December 2009.

Speed, Lesley. "'No matter how far you run’: Looking for Alibrandi and coming of age in Italo-Australian cinema and girlhood". Screening the Past, no. 19, 2006.

Speed, Lesley. "A World Ruled by Hilarity: Gender and Low Comedy in the Films of Amy Heckerling". Senses of Cinema, no. 22, October 2002.

Boyd, Candice, and Lesley Speed. "Development and evaluation of a pilot film-making program for rural youth with serious mental illness". Psychology Colloquium, School of Behavioural and Social Sciences and Humanities, University of Ballarat, 2008.

Speed, Lesley. "Anti-intellectualism in the New Hollywood". School of Behavioural and Social Sciences and Humanities, University of Ballarat, 2007.

Speed, Lesley. "Life as a pizza: the comic traditions of wogsploitation films". School of Behavioural and Social Sciences and Humanities, University of Ballarat, 2006.