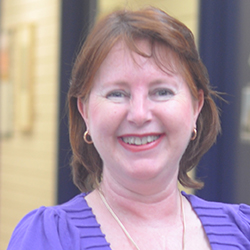 PhD in Education - University of Melbourne - 2011

Dr Sue Emmett has been extensively involved in early childhood education and the translation of research into the practical environment for over thirty years. Her professional experience includes early childhood teaching in a range of settings, work as an early childhood educational consultant and teaching and researching within TAFE and Higher Education sectors. Sue is currently working as Senior Lecturer in Education at FedUni where she coordinates and teaches in Bachelor of Education in Early Childhood Programs and manages partnerships with external organisations both domestics international. Prior to this, Sue worked as a Research Fellow within the School of Social and Policy Research at Charles Darwin University where early childhood literacy was central to her research, particularly in relation to indigenous education. Her research interests also include the well-being of children and educators including trauma informed practice in early childhood contexts. Sue has recently published journal articles, reports and a book chapter in these areas. She completed her PhD in 2011 entitled 'Preparing Professional Caregivers as Young Children's Attachment Partners: A longitudinal study of a new Australian pre-service program' which centred upon relationship focused theory and practice in early childhood contexts as well as learning and teaching at tertiary level.

Emmett, S. (2014). Is Your Being Affecting Children's Well-being? The Association of Graduates in Early Childhood Studies. (Panel Member). Melbourne, Australia.

2016 Vice Chancellor (VC) Citation for Outstanding Contribution to Student Learning application for outstanding leadership in the conceptualisation and development of Early Childhood Education curriculum for pre-service teachers through community partnerships and innovative pedagogies.