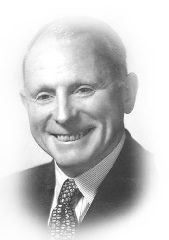 He sailed to Gallipoli as a medical orderly serving throughout World War I with distinction.  After the War, he put himself through medical school by working at night in the postal service.