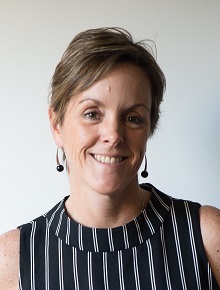 Dayle Stevens is an award-winning technology executive, intent on changing the world around her by inspiring women to get into technology.

After graduating with a Bachelor of Business & Information Systems from University of Ballarat in 1991, Dayle spent her early career as an IT consultant. In 2004 she joined the National Australia Bank and a decade later became Divisional Chief Information Officer, co-founding the Women in Technology program.

Dayle is now Divisional Chief Information Officer at AGL Energy where she continues to take a proactive leadership position to address the serious issue of a lack of gender equity in technology.

Dayle has had a tangible impact on the career trajectories of women in technology. As an early initiative of the Connecting Women in Technology program, she led the largest all-female tech study tour in the world at the time to India. Every one of the 16 participants was either promoted or in their dream job within six months.

Dayle is Chair of the Board of Robogals Global, an international not-for-profit organisation aiming to engage young women in the field of engineering, and Ambassador at Girl Geek Academy, a global movement encouraging women to learn technology, create start-ups and build more of the internet together. Dayle and Geek Girl Academy created the Girl Geek in Residence concept which spawned the world’s largest all- female hackathon.

Her contribution to the Queen’s Young Leaders Programme was recognised at a meeting with Her Majesty, The Queen.

She is a vocal advocate and committed ambassador for closing the gap for women in technology.