2020 Aboriginal and Torres Strait Islander Alumna of the 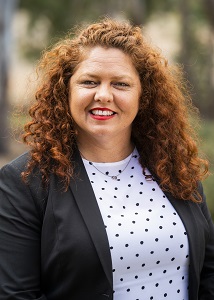 Jodie Sizer is a Djab Wurrung and Gunditjimara woman and one of Australia’s foremost Indigenous leaders. She has worked with tertiary institutions, governments, sports codes and major businesses in creating meaningful change for Aboriginal people.

With a strong background in corporate governance she graduated from the University of Ballarat with a Bachelor of Commerce in 2000, was a graduate of the Hedland Leadership program and University of Melbourne Asia-Australia New Leaders Program and is a qualified Certified Practicing Accountant.

Jodie has worked in several Indigenous organisations and government including as an ATSIC Regional Councillor at the Wathaurong Aboriginal Co-operatives in both Ballarat and Geelong. She holds several leadership roles including Chairperson of the Australian Institute of Aboriginal and Torres Strait Islander Studies (AIATSIS), only the second female Chairperson of the Institute. There Jodie is responsible for ensuring the world-renowned research, collections and publishing organisation continues with their mandate to promote knowledge and understanding of Aboriginal and Torres Strait Islander cultures, traditions, languages and stories past and present.

Jodie is one of the Co-Founders and Co-CEOs of PricewaterhouseCoopers Indigenous Consulting, a profit for purpose company which aims to drive meaningful change for Aboriginal communities. Founded six years ago, the company has grown from a dozen employees to 60 across Australia with 67% Aboriginal and Torres Strait Islander staff. Through this initiative the world’s largest consulting firm has developed a genuine business partnership with the world’s oldest living culture.

Jodie has been a finalist in the Telstra Business Women of the Year award, listed in the Who's Who of Australian Women publication, inducted on the Victorian Women's Honour roll, a recipient of the Prime Minister’s Centenary medal and listed as one of the Australian Financial Review's 100 Women of Influence. She is a passionate advocate for Aboriginal self-determination and advancing opportunities for Aboriginal and Torres Strait Islander peoples in her own community, interstate communities and internationally.