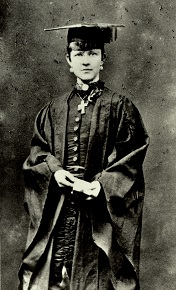 Julia Margaret (Bella) Guerin was known for her public radicalism, feminism and skilled oratory. She was the first woman to graduate from an Australian university, the University of Melbourne, with a Bachelor of Arts in 1883 and a Master of Arts in 1886.

Bella began her teaching career at Loreto, Mary’s Mount, Ballarat, where she helped develop Loreto’s education philosophy in Australia and was one of the very few lay teachers in Loreto Convents at the time.

In 1887 the University of Melbourne established an affiliation scheme with the School of Mines and Industries, Ballarat (SMB) and shortly afterward Bella was appointed to teach arts and matriculation with great success, becoming the first female principal of SMB Arts and University classes from 1887-1890.

Bella was a political activist with a commitment to equity for women. From the mid-1890s she moved in suffragist circles. From 1912 to 1914 she was Vice-President of the Women’s Political Association and during the 1913 senate election assisted Vida Goldstein, the first woman to stand for national election.

From 1914 Bella wrote and spoke for Labor and Victorian Socialist parties and the Women’s League of Socialists on a range of controversial social issues. She was an ardent anti-war propagandist and led the Labor Women's Anti-Conscription Fellowship campaign during the 1916 referendum, speaking around the country against militarism and in defence of rights of assembly and free speech.

Bella was appointed Vice- President of the Labor Party's Women's Central Organizing Committee in 1918 where she aroused censure and controversy. Bella Guerin influenced the course of our nation’s history through her work agitating for women’s rights. She died in 1923.