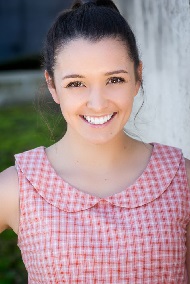 Over my first year, post-graduation, I have had the opportunity to be involved in a variety of productions. At the beginning the year, I toured Australia with Life Like Touring’s ‘Ben and Holly’s Little Kingdom’, performing nationwide in iconic theatres such as Her Majesty’s Theatre, Melbourne and the Sydney Opera House. I performed the role of ‘Kate Murphy’ in StageArt’s production of ‘Titanic: The Musical’ at Chapel Off Chapel, appeared in a nationally broadcast TVC for Coles, and had the opportunity of working with other recent graduates on ‘This Is She: These Violent Ends” part of the Melbourne Fringe Festival, written and directed by BA Acting graduates, Eidane Glover and Rachel Powis. Most recently, I had the honour to work with some of Australia’s leading ladies and gentleman in Manilla Street Productions ‘Nine’ in conjunction with The Think Pink Foundation.  I have recently begun working in schools with Meerkat Productions, performing educational theatre to children in grades Prep to Six.

The most enjoyable aspect of being an actor is the element of surprise. There is never a dull day, from arriving on a film set and being surprised by having to ride a mechanical bull or performing to 200 interruptive six year olds. There is always something different that adds a spark to the experience.

What are your strongest memories while you were studying at Federation University Australia?

The Arts Academy was an amazing place of learning and experience. Having a very small cohort, we learnt to develop our skills as an ensemble. Our tragedies and triumphs were reached together.  One highlight was returning to the stage of Her Majesty’s Theatre in Ballarat, where I grew up and have many fond memories of, to play the role of ‘Ms Dorothy Brown’ in the Third Year Production, ‘Thoroughly Modern Millie’.

I had always been nervous about the first year after university, but this year I approached everything with the mantra of ‘Yes’; ‘Yes’ to moving to Melbourne, ‘Yes’ to attending every audition opportunity’ and ‘Yes’ to meeting new people and networking. From this, I have learnt lessons about myself, both personally and professionally.