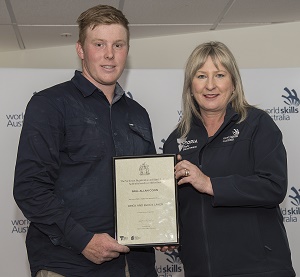 Championships in Kazan, Russia. Paul graduated from Federation TAFE with a Certificate III in Bricklaying in 2016.

Paul went on to compete at the 2018 WorldSkills National Championship in Sydney, where he won a bronze medal and was chosen to join the Skills Squad, where he trained for several months, sharpening his skills and making a trip to China, before the Global Skills Challenge where he won a gold medal and secured his place as the Australian bricklaying competitor at the WorldSkills International Championships.

Paul was part of a team of 15 Australian apprentices and tradespeople - known as Skillaroos - who made the trip to Russia to show off their chosen skill against competitors from 66 member countries.

The competition was held at the Kazan Expo International Exhibition Centre, a purpose-built centre constructed specifically for WorldSkills International and began on 23 August, after an opening ceremony the night before, and continued across the next three days.

Competitors were vying for a bronze, silver or gold medals, and results were announced at the closing ceremony on Tuesday 27 August at the Kazan Arena Stadium, also the location of the 2018 FIFA World Cup.

The bricklaying challenge, devised by an independent designer, was revealed the day before the competition commenced. The requirement was to create separate letters to form the word 'Russia' with various detailing in each letter, including a panel of render and curve cutting.

"It was really challenging," Paul said. "There was a lot involved but it looked really good. I learnt heaps of skills, how to be more efficient and am now much more confident," he said. "It's been unreal."

Paul placed eighth in bricklaying among the 31 competitors, receiving a Medallion of Excellence for his efforts.

"I was beaten by some pretty good competitors from so many different countries so you can't really complain or be down about it."

He was supported on his journey by his trade teacher Peter Eltringham and his experts Eric Davis and Troy Everett.

Australia improved its position on the international ladder by moving up from tenth to eighth with its overall performance, with several Australians winning medals, securing its place as the highest-ranked English-speaking country.