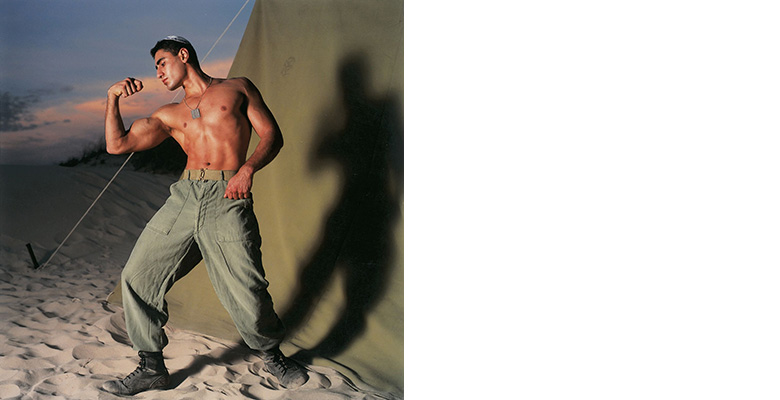 PROUDLY SPONSORED BY
Debbie Dadon AM and Embassy of Israel, Australia

‘Soldiers’ is a series of 22 photographs created by one of Israel’s leading photographers Adi Nes. Created between 1994 and 2000 focusing on both the intermediary moments between privacy and intimacy within the rigid framework of military life, the series also exposes the loss of innocence within this highly masculine world.

Considered one of the most important series of works in contemporary Israeli photography, many prints can be found in prestigious museums and private collections worldwide. Achieving awards including the 1999 Minister of Education, Culture and Sport Prize, Nes’s work was described by the New York Times as “shrewd sendups of the pervasive, macho military presence in Israeli life”.

Please join us for this unique opportunity to be part of an intimate discussion with Adi Nes at the Post Office Gallery.Free. All welcome.

Adi Nes is an award-winning Israeli photographer whose works have been presented in numerous solo and group exhibitions in Israel and abroad. Nes’s body of work includes five main series to date: Soldiers (1994-2000), Boys (2000), Prisoners (2003), Biblical Stories (2004-2007) and The Village (2007-2012). His work deals with issues of Israeli identity and masculinity, and wrestles with social and political questions revolving around gender, the centre vs the periphery, Eastern vs. Western cultures, ethnic issues, Judaism, local myths, militarism, humanism and social justice. Nes is also a teacher at the Bezalel Academy of Art and Design in Jerusalem, where he studied, and now presents courses and lectures at various art academies and universities worldwide.