Emeritus Professor Martin Westbrooke and Professor Singarayer Florentine have been working on conservation measures to protect the woodlands that have come under threat from livestock, feral grazers and native animals.

The work will be conducted on Nanya Station, the 40,000-hectare property owned by the university that includes a variety of intact ecosystems, including a system of natural salt lakes which are home to a vast number of native plant and animal species. Many of these are rare and endangered elsewhere.

Restoration and invasive species ecologist, Professor Singarayer Florentine, who is a co-director of the FRRC, said restoration of the arid woodland overstorey species Rosewood, Sugarwood, Mulga, Hakea and Belah was difficult because of sporadic rainfall, slow growth and grazing pressure from native and introduced animals such as kangaroos, rabbits feral goats.

“It is vitally important to have woodland species at different growth stages and to have individual plants at different heights and diameters scattered across the landscape to ensure the long-term survival of these plant communities and associated animal species,” Professor Florentine said.

Emeritus Professor Westbrooke said there were parameters that could be controlled, including reduce total grazing pressure through the removal of stock, rigorous control of rabbits and feral goats, and closing watering points on the property. It is likely, however, that climate change will further exacerbate these issues.

“Over the past three years, major efforts have been undertaken through an Environmental Trust grant to assist recovery of an arid woodland area of 2,000 hectares which had previously been cleared by chaining to allow cropping,” Professor Westbrooke said. 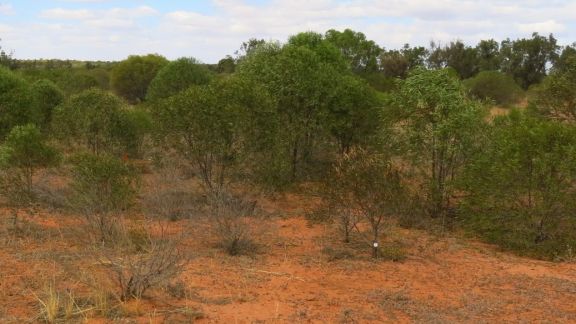 “These actions have been successful in allowing significant recruitment of both overstorey and perennial understorey species. The knowledge gained from our work on Nanya Station can be shared and applied to other similar woodlands within the arid zone.”

The funded project will assist perennial recruitment in further areas through closure of remaining earth tanks, the installation of grazing exclosures around remnant overstorey trees, and the collection and spreading of seeds from local provenance species and ripping of roots of rosewood to stimulate suckering. Suckers are plant shoots that grow from a tree’s roots.

“This technique was trialled on about 30 trees in late 2019 and, with a few timely rainfall events in the months that followed, many suckers were produced, up to 30 meters from parent trees and these are now being monitored,” Professor Florentine said

“Some exclosure plots had been put in place almost fifteen years ago, allowing the measurement of growth rates of key arid woodland species. We are aiming to correlate the species’ growth rates with rainfall patterns to inform the broader scientific community.”

Professor Florentine said Nanya Station was a significant location for biological diversity and an important component of the National Reserve System due to its relatively short pastoral grazing history. This, and the positive relationships developed with neighboring landowners and the NSW National Parks and Wildlife Service has led to the attraction of significant funding for conservation projects on the station and at neighbouring properties in partnership with landowners, he said.

Nanya is Nationally significant biological refuge, being home to a large number of species listed as endangered under Federal or NSW legislation.  Other current projects on Nanya linked to the NSW Saving Our Species program include studies on current threats to the southern ningaui, a tiny marsupial, the Mallee worm-lizard, and three bird species – the shy heathwren, the white-fronted chat and the redthroat.  Threatened plant species being studied include Tecticornia lylei, Acacia acanthoclada, Austrostipa nullanulla and Acacia loderi.

“Nanya’s intact ecosystems and biodiversity made it a key research centre for the FRRC and we are very appreciative of the support from the New South Wales Environmental Trust for our work on Nanya and surrounding areas,” Professor Florentine said.

Our fired landscape – why things are different now

This project has been assisted by the NSW Government through its Environmental Trust.