The bushfires that have ravaged eastern and southern Australia’s landscapes from mid-2019 and continuing into 2020 have occurred at unprecedented scales. The spatial extent, severity, and for some areas, return times since previous high-severity fires, continue to have catastrophic impacts on biodiversity. Our ecosystems have been pushed to, and in some instances beyond, their limit in this large-scale ecological disaster.

The cumulative effects of multiple fires across years has huge ramifications. In Victoria, the massive fires (more than one million hectares burnt) that punctuated the end of the decade and have provided an ominous start to the new decade, have been super-imposed on a landscape still in the early stages of recovery and regeneration from fires in 2003 and 2006. Add to this other significant fire events in Victoria, including the 2009 Black Saturday fires, and fires in Bunyip State Park in 2019 and the Big Desert in 2002. Fires in the Grampians in 2006, 2013 and 2014 burnt about 85 per cent of the national park, while at Wilson’s Promontory fires in 2005 and then in 2009 burnt nearly 70 per cent of the national park area.

The scale of fires and the areas burnt over the past two decades in Victoria are clearly depicted on maps created by Federation University Australia’s Centre for eResearch and Digital Innovation (CeRDI) on the SWIFFT portal.

Such large fires in quick succession quickly change the composition of habitat and environmental conditions available for biodiversity. Many species depend on older growth stage vegetation for critical habitat features. Features like tree hollows, coarse woody debris and deep, damp, decomposing litter layers are associated with areas that have remained unburnt for long periods – sometimes 50-80 years.

Other species may find optimal habitat conditions in vegetation communities that are in the early stages of regenerating post fire. So when fire burns such extensive parts of the landscape as witnessed in the recent fires, we see the balance shift from a landscape capable of providing suitable habitat to cater for all species, to one that is more uniform and lacking diversity and variety.

While much of our flora and fauna cope with fire, recognising many need fire events to trigger reproduction, regenerate or to lead to the development of suitable habitat or food resources, the increased extent, frequency, severity and shortened interval of the recent fires will have deleterious impacts on biodiversity. 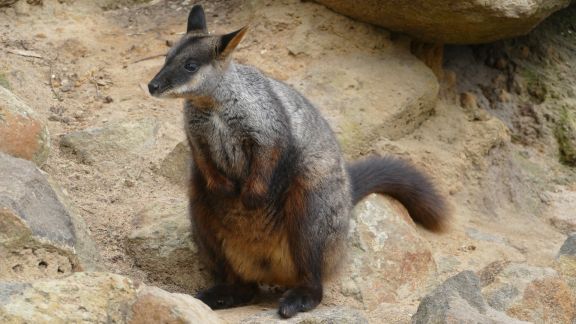 The critically endangered brush-tailed rock wallaby has had about 50 per cent of its potential habitat in Victoria burnt, while the remainder is at risk while fires continue to spread. Its habitats and populations have been impacted more heavily through NSW and Queensland by the fires there.

Unfortunately, those populations outside the fire areas in these states are already suffering from the rigours of prolonged drought. The outcomes of such stochastic events can be the tipping point for small populations, pushing them so much closer to extinction.

And the impact extends beyond the scorched land. In East Gippsland there are numerous aquatic wildlife, such as East Gippsland galaxias and the East Gippsland spiny crayfish, where the fire is expected to have impacted almost their entire range.

These species were likely safe during the fire but now face significant threats from siltation and changes in water quality in the months ahead as particles and debris is transported into streams from the burnt landscape. That the entire species populations are likely to have been impacted means such species are in a dire predicament and at very high risk of extinction.

The extent of the recent fires in eastern Australia has likely had devastating impacts on some species which, until now, have not been considered at significant conservation risk.

The iconic superb lyrebird has suffered fires in the majority of its distribution in the past few months. The northern and central sub-species have experienced fires in greater than 50 per cent of their range, while for the Victorian and southern NSW sub-species more than 30 per cent have been affected by fire.

Even though individual birds show remarkable ability to survive the initial fire by seeking refuge in damp gullies and creeks or by sheltering in wombat burrows, the loss of well-developed litter layers for foraging and food means they often struggle to survive and persist in early post-fire regeneration.

Our understanding of the small things, like invertebrates, microbes and fungi is not as advanced as for vertebrates and plants. These organisms underpin our ecosystems, driving their function, including critical processes such as decomposition, cycling of nutrients and pollination.

Further, invertebrates provide key food resources for small mammals, birds, reptile, frogs and other invertebrates. The fires would have devastated these organisms. While more than a billion animals have been predicted to have perished during the bushfires, this is just an estimate for vertebrates, and this number would be many, many magnitudes greater for invertebrates.

That much of the fire-affected areas have been in ongoing drought, the combined dry soils and the severity of the fires would have ‘cooked’ the upper soil's layers, in a sense having a sterilising effect. This will have repercussions for the recovery of the soil ecosystem, and as a consequence the above ground ecosystem recovery too.

The response by organisations and government bodies to the recent fire event has been remarkable. While many of the fires are still burning, already the Victorian Department of Environment, Land, Water and Planning (DELWP) has released an initial plan for biodiversity and recovery. The bushfires in Australia over the past few months have not been unexpected; the scale, magnitude and intensity of the fires aligns with predictions made around climate change scenarios.

This disaster is a dire warning of the nature of fire in the Australian landscape. An alarming number of species are now at a much-increased risk of extinction, and this will be exacerbated by future fires. The conservation of biodiversity needs to be a central pillar in how we plan for and manage fire in the landscape.Dr Grant Palmer

Australia is a world leader in fire ecology research and monitoring but there is still much we don’t know and the fire landscape is changing rapidly. Some of our previous knowledge, understanding and actions are unlikely to adequately inform or ensure effective conservation of biodiversity into the future.

There is clear need for integrated and effective monitoring to be implemented across the fire area to get a clearer picture of the status and persistence of wildlife and to inform ongoing actions for planning and managing future fire.

Research and monitoring projects such as the Fire in Temperate Forest Landscape project undertaken by Federation researchers provide valuable insight on how fire shapes wildlife communities in the landscape. By investigating the effect of different fire mosaics on fauna in the landscape over long time-frames information becomes available to enhance management effectiveness to achieve better conservation outcomes.

Dr Grant Palmer is a Senior Lecturer in Environmental Science at Federation University Australia's School of Health and Life Sciences.