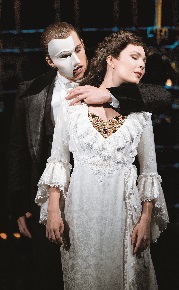 Josh Piterman has become renowned for his musical talents on the world stage since graduating from our Arts Academy in 2006.

“Josh is an exceptional talent. He is extremely versatile, as is evidenced by his ability to cross into operatic territory and be equally at home in the mainstream and cutting edge of music theatre,” Dr Chew said.

“I think Josh made the most of the training he received at the Arts Academy. As he says himself; “It’s pretty simple, if it wasn’t for my time at the Arts Academy, the detail of the teaching methods and the work ethic it instilled in me, I wouldn’t be enjoying the career I’ve had over the past 12 years.”

“Work hard, be mindful of your physical and mental health and try to remain open and curious.”

Josh, who recently performed in the UK’s touring production of Hairspray and won the Green Room Award for Best Supporting Actor in Cats, recently reflected on his university days.

It was a process of multiple auditions, flying back and forth from Melbourne to London. Either way it went, I was bound to rack up the frequent flyer points!

Very rigorous and nerve racking as you would expect for big auditions. The creative team was very clear in what they wanted. I had to take on their direction as best as I could in the heat of the moment and remember everything they had said, bringing the character to life more and more in each call back.

Is this your career highlight so far?

Most definitely. This role is like nothing else. So rich, so full of depth and such a thrill to sing. Add to that, the fact that I was performing on the same stage, in the same theatre, with the same set that Michael Crawford used when the show opened back in 1986, is very special.

What are some of your other career highlights on the stage?

Every time I have the opportunity to step on stage it is very special but shows like West Side Story and Beautiful The Carole King Musical hold unique places in my heart. As does singing Nessun Dorma last year at the Sydney Opera House for Australia Day Live.

What are your strongest memories as a student while you were studying at Federation University?

Performing in Kiss and Kate was amazing. Moments of discovery, moments of break throughs. I loved my class mates and lecturers and I still hold very dear relationships with many of them.

For me, I think the hard work starts when you leave university and it doesn’t stop! Show business is ruthless and requires very thick skin as you need the ability to bring all of yourself to the work but at the same time you need to be able to separate yourself and not take things personally (like rejection). I think meditation has been the greatest gift that I have found in dealing with both sides of this coin.

Josh’s other stage credits include West Side Story, Blood Brothers, An Officer and a Gentleman, Grease 2 and Kismet. In 2018, Josh released his debut album which went number #1 on both the Aria and ITunes charts in Australia.