In the 1990s, a 17-year-old nationally ranked tennis player was experiencing regular cramps while playing in hot conditions. His medical history suggested no reason for him to be more prone to cramping than his peers until sport scientists found he produced three times as much sweat as other players.

It was thought that the excessive loss of fluid and sodium predisposed him to cramp in hot conditions. The player increased his dietary intake of sodium and was reported to have eliminated the problem.

Are cramps really so easily treated? This problem has attracted much interest in sport for decades, so let’s look at the latest research on cramp relief in sport.

Taking pickle juice is a relatively new idea that has gained popularity among professional athletes throughout many sports like top-flight basketball, several football codes, including the NFL in the USA, soccer worldwide and the AFL.

Pickle juice is said to either prevent cramps or stop cramps once they start. It started with athletes consuming the juice, or brine, of pickles and has become a go-to sports supplement. While some athletes are affected by cramp, others are not. For those who are, it can be a constant cause of stress with players worried whether they will be able to play out a match or train hard enough.

Exercise-associated muscle cramps (EAMC) are described as involuntary, spasmodic, often painful contractions of muscles which may last several minutes. These cramps usually occur in muscles of the legs especially hamstrings and calf during or soon after exercise, while the muscles are tensed in a shortened position like when the knee is fully flexed.

These cramps are common among athletes at all levels from recreational weekend warriors to elite and are associated with increased levels of muscle damage indicators and fatigue which impair function. Cramps are also more common during exercise in hot conditions.

The cause of EAMC is still unclear with the ‘electrolyte-depletion and dehydration theory’ and the ‘altered neuromuscular control theory’ thought to be the most likely possible explanations.

The first of these is based on anecdotal reports going back over a hundred years that suggest EAMC occur when fluid and electrolyte, or salt, levels are reduced with exercise due to sweating. It is believed that sweating results in reduced plasma or fluid in the spaces between cells affecting function of muscle fibres. Many potential remedies, such as stretching, massage therapy and kinesio-taping have been developed in an effort to treat EAMC.

A study published in 2010 reported that taking pickle juice during an electrically induced muscle cramp (EIMC) reduced cramp time by up to 45 per cent. The authors concluded that the inhibitory effects of pickle juice on EAMC were likely due to acetic acid contained in the pickle juice.

While little is known about these receptors, they have been shown to be stimulated by weak acids including acetic acid and are known to respond to temperature and chemical stimuli. Another example of a receptor potential channel is vanilloid 1 (TRPV1) which opens when the temperature is greater than 40°C and in the presence of a chemical called capsaicin.

However, studies that induce a cramp on volunteers are difficult to perform. A recent article compared mouth rinsing pickle juice with drinking pickle juice and a water control and found that the variation between individuals for the time a cramp would continue varied greatly and did not show that pickle juice, rinsed or swallowed, had any effect on time to cramp offset. 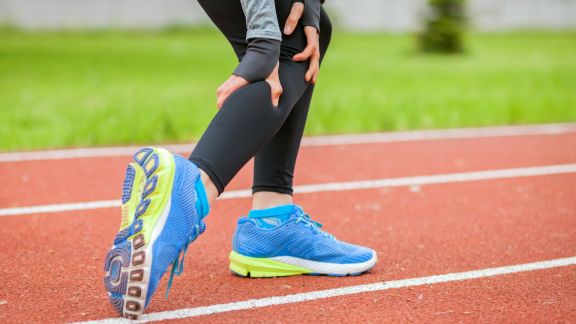 So, currently, many athletes use pickle juice as a way to reduce likelihood and severity of cramp although the evidence for its efficacy remains vague.

Excessive cramping can be debilitating to athletes and can potentially curtail the playing careers of professional athletes. NBA player Justin Hamilton experienced debilitating cramps that saw him sidelined from several matches. Experts were unable to provide concrete data to show how cramps occur and so treatment and prevention options were purely speculative and largely anecdotal.

Since cramps often occur during high intensity exercise in hot conditions, hydration was thought to be a key factor. In the case of Hamilton, he drank several bottles of water before and during matches in hot conditions, most of which simply came out again minutes later.

He consulted doctors who found his sweat contained five times the normal concentration of salt, and so Hamilton replaced water with salty water and a Gatorade chaser. But the question of how such fluid intake can alleviate a cramp remains, since it takes time for the ingredients to be absorbed via the digestive tract and distributed to the muscles where it is needed.

Since exercise-associated muscle cramps occur when the muscle is shortened, reduced tension along the tendon may decrease inhibitory feedback from the sensory receptors that detect stretch or tension through the tendon, while excitatory impulses are being generated by spindles in the muscle.

This results in an imbalance between inhibitory and excitatory drives to the neurons that activate the muscle fibres, causing greater excitability further upstream, at the spinal level and enhanced neural drive to muscle fibres. This usually begins with tiny portions of the muscle involved and gradually leads to a full, sometimes debilitating, cramp.

While some athletes are absolutely convinced that pickle juice helps their performance, the science is still not convincing one way or the other. So, if the flavour is a barrier for you, just stick with water to rehydrate.

Dr Andrew Lavender is a Senior Lecturer in Exercise and Sports Science.