It is often called the greatest show on earth but controversy surrounding the Tokyo Olympics has raged up until the eve of the opening ceremony and we can likely expect more of the same over the next two weeks. The city is in a state of emergency and events will be held without the usual cheering spectators, but the show will go on.

For financial reasons, the IOC will be very pleased the Olympics are proceeding. In years when the IOC holds the Olympics, their net surpluses far exceed those in non-Games years, with Summer Olympics usually contributing significantly more net wealth to the IOC than the Winter Games. The IOC and the organisations within the Olympic movement are privately funded, making them very reliant on the staging of the Olympics Games for revenues and ongoing financial stability.

Annual reports over the last six years clearly illustrate the importance of staging the Olympic Games to the wealth of the IOC. In 2014 when the winter games were held in Sochi, the IOC’s reported revenue was $US1.8 billion, while a year later, with no games, this fell to $US156 million and a substantial loss was made. The following year – 2016 – the summer games were held in Rio and provided a financial boon to the IOC with revenues hitting a record $US3.5 billion and surpluses soaring to $US668 million. The IOC described these Olympics as the most consumed Olympic Games in history. The Rio Summer Olympics doubled the revenue of Sochi and was 60 per cent higher than the PyeongChang Winter Olympics in 2018. (Note: all figures in the graphs are in thousands of US dollars). 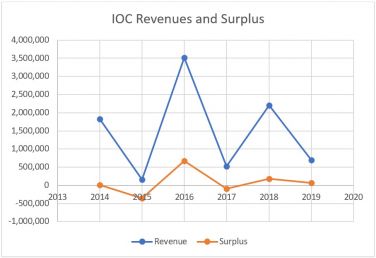 The IOC is the owner of the global broadcast rights for the Olympic Games and is responsible for allocating these to media companies throughout the world by negotiating rights agreements. Television broadcasting rights for the Rio Olympics made up 80 per cent of all IOC revenues in 2016. For the Winter Games, these were between 65 per cent and 70 per cent.

An emerging and important stream of revenue for the IOC is the Olympic Partner Program (TOP). This is described as is the ‘highest level of Olympic sponsorship, granting category-exclusive marketing rights … to a select group of global partners’. Originally intended to be a group of 12, two more sponsors were added in 2019. In 2014 the revenue attributed to IOC’s TOP organisations was $US309 million (17 per cent of total), and this increased to 24 per cent in 2018. In the non-Olympic event year of 2019, TOP made up 77 per cent of all revenues.

The IOC is a not-for-profit independent international organisation that was founded in 1894. Within the annual report narrations, the IOC regularly re-enforces its not-for-profit status with comments such as “90 per cent of the revenues from the Games go straight back into sport and athlete development” (this statement was mentioned on six separate occasions in the 2019 Annual Report). The IOC also states that “around $US2.5 billion” has been put towards the staging of the Olympic Games to ease the financial burden on the host cities. 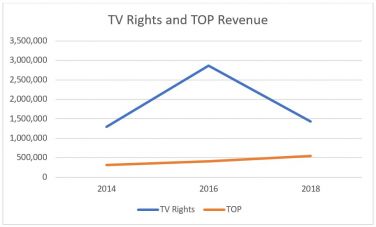 The finances of the host city organising committee are independent of the IOC. When Tokyo was selected from the six city bids in 2013, the cost of staging the event was estimated to be $US6.6 billion. Today this has blown out to $US26 billion. The Tokyo Organising Committee is made up of the government and people of Japan, Japanese businesses and sporting organisations, and the City of Tokyo.

The main tasks for the organising committee are to ‘create the required installations: competition venues, stadiums and training halls’. This accounts for most of the costs of holding the event. The Tokyo Organising Committee has 15 ‘gold’ partners, 32 official partners and 20 official supporters.  In a sign of the unpopularity of these games, Toyota, one of the Games' biggest corporate sponsors, has decided to pull all its Olympics-related advertising in Japan.

The IOC openly states that its strong financial foundation is driven by its partnerships with sponsors and broadcasters, which provide sustainable revenue streams to ensure the independent financial stability of the Olympic Movement.

The long-term stability of the IOC is reflected in the growth in accumulated funds currently which are $US2.5 billion, – up nearly 43 per cent on 2014. Likewise, the cash balance of the IOC is currently $US854 million which is significantly higher than the 2014 figure of $US261 million. 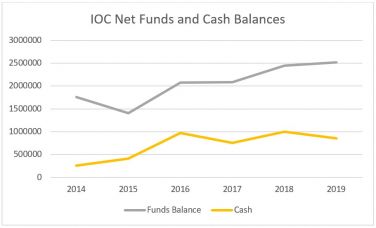 An example of the IOC’s wealth is demonstrated in its new headquarters. In 2019 the IOC opened Olympic House to bring together its 500 employees under one roof.  Built at the cost of $US205 million, just over half of this total went on building the glassy structure which the IOC stated would make it one of the most sustainable buildings in the world.

Of significant note to Australia, the IOC’s executive board on Wednesday confirmed Brisbane as the host of the 2032 summer Olympics. As one of the world's top 10 liveable cities, Brisbane was originally nominated because it aligns with the social and economic development plans of the IOC. While this will no doubt be a fantastic opportunity for Brisbane, it will also likely further swell the IOC’s finances.

Dr Abdel K Halabi is an Associate Professor in Accounting at the Federation Business School. He is a Fellow of the Chartered Accountants of Australia and New Zealand (CAANZ) and a Certified Practising Accountant with CPA Australia.  He is co-editor of Sporting Traditions the journal of the Australian Society for Sports History.

The AFL season is over … let the financials begin!