Endorsers of a Leunig cartoon showing a mother looking at her phone while a toddler lies behind an empty pram argue people are only upset because the truth hurts, while critics argue that the cartoon is not harmless, but instead perpetuates a negative, women-shaming culture.

So, what does the research say?

Parents, specifically mothers, now spend more time interacting with their children than they did in 1965, described by Bianchi and colleagues as the “heyday of the stay at home mother”. While the actual time mothers spend with their children has not changed much, the hands-on nature of mothering has. For example, a parent’s leisure time is more likely to be spent with their children, and mothers today spend around five hours a week engaged in hands-on parenting, compared to one hour 45 minutes in 1975. Research from the Pew Research Centre suggests that many parents worry that it is still not enough.

Debates around motherhood wax and wane, and are enjoying something of a resurgence lately. Meghan Markle’s high-profile pregnancy and early motherhood has sparked the latest round of discussion about what it means to be a ‘good mum’. Cultural anxiety and aspirations about motherhood are reflected back to us through films like Bad Moms and its sequel, in which a ‘bad mum’ is a woman not completely focused on mothering at all times. Dubbed intensive mothering, contemporary motherhood is described by Hays in 1998 as “child-centred, expert guided, emotionally absorbing, labor intensive, and financially expensive”.

Despite evidence suggesting that helicopter parenting may lead to negative mental health outcomes in children, including depression and anxiety, the pressure to be to a ‘good mum’ still looms large. Intensive mothering is often presented as aspirational, and may be stoked by economic and cultural anxieties; not wanting your children to be left behind.

Ironically, while intensive mothering may be born of economic anxiety, it is more likely to be practiced by affluent families who are able to afford the costs of organic food, extra-curricular activities and top-shelf schools. Intensive mothering has been associated with a range of negative mental health outcomes, including stress and depression.

More recently though, it’s been identified that the pressure to be a perfect mother, even for women who do not subscribe to the perfect mothering ideology, can lead to increased stress and anxiety. This means that regardless of whether or not women are emulating mommy bloggers on Instagram, they are subject to the negative effects of society’s expectations of what it means to be a ‘good mum’.

Alongside the all-consuming demands of intensive mothering, women are also subject to the ‘yummy mummy’ discourse perpetuated by celebrity mothering cultures, where women’s bodies ought to (or should be made to) bounce back to a state of sexual desirability as soon as possible after the birth of a child.

Women who are under pressure to return to a thin-ideal body postpartum are, similarly to mothers experiencing a pressure to be perfect, are higher on rates of depression and low self-esteem. Not only do these women have poorer mental health outcomes, but the internalisation of a thin-ideal may impact interactions with their children, as research shows body image concerns is related to lower intended and actual breastfeeding duration. 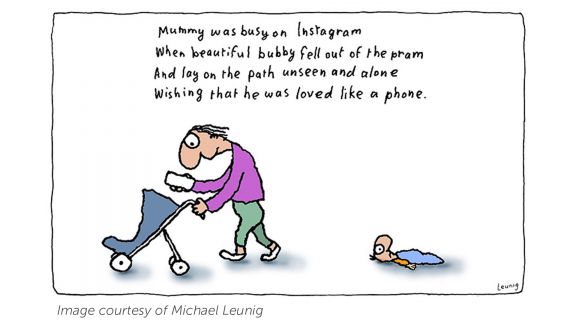 What’s most worrying about these trends is that the maintenance of these idealistic, perfect mother expectations does not stop once you log out of social media. Henderson and colleagues in 2016 found that stress is related to mother’s pressure to be perfect, and guilt for not meeting expectations, regardless of media influence. Similarly, Lovering and colleagues in 2018 showed that women’s drive for thinness postpartum was directly influenced by a family culture of weight-related concern. Shaming mothers for being on their phones, then, is not going to magically ‘solve’ modern parenting problems.

At best, criticising mothers for spending time on their phones reflects a position that is completely out of touch with modern society (how many people read the discourse about that cartoon on their phones?!). On the worse end of the spectrum, it can feed into a culture of mother shaming that can have some extremely negative outcomes.

Mothers face an immense amount of pressure to be ‘perfect’ and the internalisation of these standards is linked with a range of negative mental health outcomes, the worst of which includes postnatal depression, which brings with it various risks including an increased risk of suicide.

Research has repeatedly shown that mothers do not help-seek when experiencing postnatal depression for fear of appearing to be a bad mother, and yet, we continue to criticise. Despite being more connected than ever before, new mothers experience immense loneliness, and often turn to the internet for advice about parenting.

While the internet and social media may make mothers feel more connected, it can also be confusing, stressful and guilt inducing. Getting the balance right may be just one more thing contemporary mothers need to balance.