They are a menace at backyard barbecues and experts at infiltrating homes through the tiniest of spaces, but the humble blowfly is playing a vital role in maintaining healthy ecosystems, cleaning up where others would rather not.

Dr Philip Barton, an environmental science lecturer in the School of Science, Psychology and Sport, has been studying the role of flies and other insects in removing decomposing animals from the landscape. Ruthlessly efficient, insects can remove a small animal carcass from the landscape in a handful of days.

“You might see a dead possum when you’re out walking your dog and the next day, it’s gone,” Dr Barton said. “The process is so quick, and insects are so efficient in what they clean up. There are animals in urban areas and rural areas and they're dying all the time – nothing lives forever – and they get cleaned up too.”

“We can thank the insects for this process, but the next layer of my research is asking questions about who does all the work, and really it is the blowflies.”

To demonstrate their efficiency, Dr Barton studied blowflies at work on rabbit carcasses during a warm summer streak. He discovered that about one half of a rabbit will turn into blowfly larvae in four-to-eight days.

“That's the equivalent of about 2,000 blowflies from one rabbit. So if you think about a rabbit and how quickly it decomposes, this carcass is basically growing wings and flying away because of how efficient and how good these blowflies are at what they do,” Dr Barton said.

But the implications of how efficiently they work takes on a greater significance in bushland and farming areas.

When an animal dies and the blowflies move in, they eventually emerge from the carcass to rest on plants and contribute to the pollination process. Mango farmers in the Northern Territory are even known to bring dead animals onto their properties for this purpose.

But Dr Barton said in a dysfunctional ecosystem, where there are few native flies and fewer native scavenger animals like dingos or goannas to clean up carcasses, the ecological implications can be dire.

His research has shown that kangaroo carcasses that aren’t removed quickly become a focal point for bacteria build-up and can have a detrimental impact on the immediate area that can last for 10 years or more.

The nutrients from the animals can leave elevated phosphorus levels in the soil. Native plants cannot deal with this and won’t grow back in the same spot, leaving a dead zone in the environment and the door ajar for exotic weed species to move in.

His current research includes a project where several deer carcasses have been left to decompose at sites near Kosciusko National Park. The research team will study the insects and scavenger animals drawn to the carcasses and the long-term effect the dead animals will have on the soil. 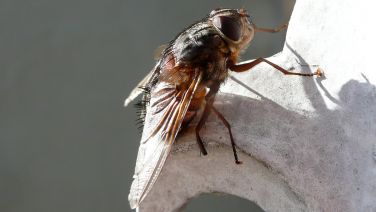 “We need blowflies and we need them to act quickly.  They’re everywhere – they can disperse across many kilometres and there are different species in different parts of the country. Those that are in warmer coastal climates are different to those in alpine or cooler climates and to those in deserts,” Dr Barton said. “But they all do the same thing and we call that redundancy in ecology.”

“If these dead animals aren’t decomposing fast enough, they can also harbour diseases. And then there are risks to livestock production areas as well, where you'll get parasites and other pathogens and other pests like foxes that hang around these carcasses.

Dr Barton said more work was needed to understand the impact of the growing number of mass mortality events on ecosystems. These include Australia’s horrific bushfires in 2019 that killed an estimated one billion animals and the mass fish kills in the Menindee Lakes brought on by drought, algal blooms and water temperature changes.

Climate change is playing a role in more of these events and more likely to become more frequent, Dr Barton said.

The ecological impact of camel culling across central Australia and the measures to control deer, wild pig, goat and fox populations in the Kosciusko National Park – where the animals were left in the environment – were also not known.

But in urban or farming environments, more could be done to manage carcasses. This was not always on the agenda for councils and land managers.

“Smaller animals are often left to sit in the gutter until a big rain event, then they are washed into stormwater systems before creating pollution in waterways,” Dr Barton said.

“So these blowflies aren’t just annoying and disgusting, they're really important with pollinating, nutrient recycling – and cleaning up all the dead animals in the landscape.

“If you're having a barbecue, of course they’re going to be annoying, but if that carcass nearby wasn't removed so quickly, it becomes a real focal point for bacteria build-up or it will attract other pests and that can create many more problems.”