David Waldron says there has never been a more important time to teach the next generation of researchers how to find and critically analyse information from the past.

The historian from Federation University's School of Arts has partnered with the History Teachers' Association of Victoria (HTAV) to create a video for the HistoryEDge program, continuing his long association with the group to promote the study of history to students across the state.

From big cats in Western Victoria to ghost scares during the gold rush, much of Dr Waldron's research focuses on odd and quirky folklore that isn't the usual preserve of historians. These often outrageous stories continue to generate enormous public interest, and in some cases, take another life on social media.

The video is part of a series that is a guide to historical researchers and outlines the pitfalls and traps when piecing together history that has been collected from digital sources.

"In the past, I'd physically have to go and trace through giant piles of newspapers to find the stories I was researching because one of the best ways to start any project like this is to start with and trace out media representation," Dr Waldron said.

"This would start with a broad survey of media coverage, grouping stories by themes and dates and then plotting these out to make a graph to show when new interpretations start. This would illustrate how many stories were dedicated to one interpretation versus another to understand when new stories emerge and when the narrative begins to shift.

"With the Eureka Stockade, for instance, you can look at representations from when the miners were classified as rioters and rebels. But later, it starts getting linked to national identity and people start calling it the foundation of democracy, and so on."

The COVID-19 pandemic has added another layer of complication to historical research as many historians cannot travel to source original hardcopy evidence.

Many historians rely on information sourced from digital libraries, including Trove – but Dr Waldron warned that key elements of a story could be easily missed as online sources often lacked details like keywords – or context, including the story's position in the newspaper.

At the end of World War 2, newspapers began publishing stories of big cat sightings in Western Victoria – a topic that Dr Waldron has researched extensively.

"I was writing the book on big cat panics, and two things jumped out at me. The language changed after World War 2 – people started calling them panthers where beforehand they were referred to as lions and tigers. Panther is a fairly contemporary term, and when you dig a little deeper, you realise this story goes right back to early settlement, rather than it being a post-war panic," Dr Waldron said.

"So these are the pitfalls and traps. When you're reading the physical newspaper, scanning the content, you realise that the position of the story in the newspaper is important. Is it a front-page story, or is it in the quirky odd spot section? That matters a lot.

"I talk about these issues in the video and include animations and so on discussing doing digital research. This and the other videos in the series will be a really helpful guide for anyone engaged in historical research." 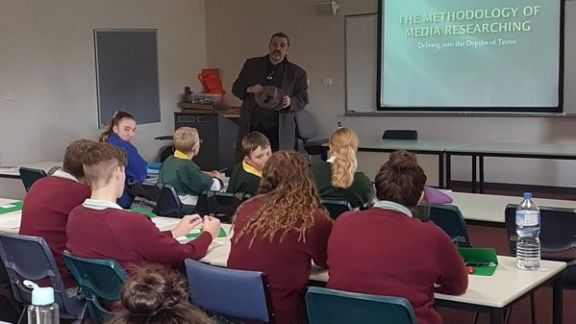 Dr Waldron is also participating in the History Enrichment Program (HEP), running school projects and designing curriculum to support high-school students in their educational activities. The program is funded by the Department of Education and Training and focuses on gifted and talented students, bringing together advanced learners in small groups who share a passion for history.

Students work on a variety of tasks developed for their advanced needs and capabilities. The program culminates in the development and presentation of their chosen passion project.

A recent example of a passion project from a participant in the program was a video that detailed the history of makeup in ancient Egypt. Other students have made recreations of Victorian-era houses and costumes and foods popular from different periods.

"Going out to schools and running projects like these is just so important. As academics, the thing that we have to do is reach out to the community. Unfortunately, there is so much misinformation out there – particularly in social media – and we live in a world where expertise is routinely derided and ignored.

"We have seen disastrous outcomes of this in all sorts of areas, from social policy to some of the crazed ideas that are circulating now amid a deadly pandemic.

"Students are our future and when people are entering the workforce, they need to be aware of not just what's real, not just well researched, but how to evaluate information and critically think and analyse it themselves."

Telling the tales from Rat City