A trial on Victoria's southwest coast is using specialised electrical resistivity imaging equipment to give researchers an insight into the level of saltwater encroachment in the region's groundwater systems.

Dr Ander Guinea, geosciences lecturer in the School of Engineering, Information Technology and Physical Sciences, is working with Southern Rural Water on the trial that is studying the interaction between ground and seawater.

In coastal areas, groundwater typically finds its way to the sea, with a transition on the route between fresh and salty water. When water is extracted from the ground in these areas, encroaching seawater can find its way into what were thought to be salt-free water sources further inland.

This can lead to saltwater moving into marshes and other wetlands fed by groundwater, with potentially devastating consequences for fish, birds and other animals and plants.

Farmers rely on groundwater, extracting it from bores to use on their crops.

Federation University Australia's Geoscience group purchased the electrical resistivity imaging equipment in 2020. It is believed to be the only one of its kind in Victoria.

The process works by injecting an electrical current into the ground between a pair of electrodes and measuring the differences in voltages with a second pair of electrodes. This measurement can be repeated along a line of electrodes, allowing the electrical conductivity of the terrain to be calculated in 2D profiles or 3D models. These models can be used for several purposes, including layer mapping, defining depth to bedrock, landfill investigations, and groundwater and contamination investigations.

"With this technique, we measure the conductivity underground, and we can create 2D or 3D models of the different conductivity of the terrain," Dr Guinea said.

"There are layers of different materials underground, and we might be able to pick up those variations, but, in this case, the salt is making the water much more conductive.

"The more salt there is, the better it conducts electricity. Water is usually considered conductive, but pure water doesn't conduct that well at all. Because of that characteristic, these methods will be capable of identifying the transition between very conductive to not-so conductive water." Dr Ander Guinea

Dr Guinea said performing the trial at different times over the year could show how the balance between freshwater and saltwater was changing over time.

"But overall, this encroachment is happening every year – the seawater is moving a little bit further into the system. Considering that sea levels are rising, and water usage is also rising, this could create bigger problems in the future," Dr Guinea said. 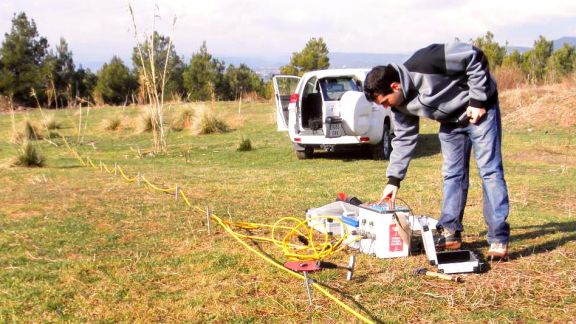 "Over time, ideally, these water systems should be relatively stable. Perhaps in some areas, there will have been more encroachment because there is less recharge coming from the continent, but then in the wet season, you should have the opposite. You expect to see that transition move a little bit, although that can also depend on the characteristics of the aquifers."

Previously, this information was gathered by extracting water from a limited number of bores. But the variability of the water systems throughout the seasons meant the readings were unreliable.

Dr Guinea has also used the technology in a project with Victoria's Environment Protection Authority (EPA), studying closed landfills and their potential for environmental hazards.

"Today, landfills are required to have linings and different methods for collecting hazardous waste, but in earlier times, the best-case scenario may have been a landfill site lined with clay," Dr Guinea said.

"The problem in many cases is we don't know how deep they are because they have long been covered, and there may have been gas leaking out and sometimes contamination going underground to groundwater systems.

"But using this technique, we can delineate the landfill and its depth, and we can even identify different types of waste."