Federation University researchers are working with farmers to trial the economic potential of industrial hemp, a crop that produces both fibre and seeds that can be used in products as far ranging as textiles, biofuel and composite building materials.

Hemp oil can also be extracted from seeds and used for cosmetics, paints, and solvents, making it a potentially valuable component of Australia's agricultural industry.

The plant – Cannabis sativa – is similar in appearance to medicinal hemp but differs in its chemical composition. It has low concentrations of tetrahydrocannabinol (THC), found in cannabis plants and harvested under controlled conditions for medicinal use.

Co-director of Federation University's Future Regions Research Centre Professor Singarayer Florentine says while industrial hemp crops have been grown in Australia on a small scale for several years under strict licensing conditions, there has been little research into assessing the suitability and economic potential of the crops across different climates and farmland conditions.

Industrial hemp has been identified as a potentially significant industry for Australian growers, which prompted his visit to Canada to look at trials in 2019. As a result, Professor Florentine says he is keen to help farmers and researchers develop their knowledge for growing crops in Australia.

"In Canada, these trials have been going on for more than 20 years, and consequently, they have a lot of knowledge about growing these plants successfully in various conditions. Now, in Australia, governments are keen to explore industrial hemp production because of its significant economic potential and are excited about its apparent suitability for Australian agriculture," Professor Florentine said.

"Federation University has become involved in this project because there has not been much systematic agronomy work done with this crop. If we were to look at the canola industry as an example of successful agricultural production, involved farmers know almost everything about growing canola plants, what nutrients they need to add, how much rainfall they are going to need to stimulate a good harvest, and what the most efficient harvesting techniques are.

"The case of industrial hemp at the current time is quite different. We need to determine whether we have the correct soil and moisture conditions to stimulate high production levels. We also need to ask if we have the correct harvesting equipment to collect high-quality fibre and seeds and have the facilities to process them for sale in national and international markets. These are the type of questions and challenges that this embryonic industry is facing right now". 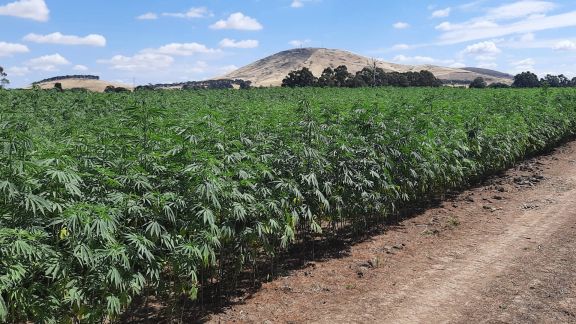 Professor Florentine says there is huge global demand for crop products, and it is important that Australian agriculture does not miss the chance to capitalise on this demand. "We must not get left behind because it is right now that this opportunity is waiting for us."

According to AgriFutures Australia, a key industry group that supports agricultural industries, the estimated gross value of Australian hemp production in 2011–12 was only about $300,000. For the industry to achieve its potential, the group says there needs to be a significant increase in production scale, a better understanding of the crop's agronomy, and more efficient mechanisation for harvesting and processing. Long-term markets also need to be established and secured.

If the industry can be developed to meet its expected potential, it is estimated that the gross value of industrial hemp production could reach $10 million by 2025.

Industrial hemp trials have been carried out across Australia, and although there have been varying successes with the trials because of crop varieties and local growing conditions, commercial-level crops are now being established in all states. Professor Florentine says more work is needed to determine whether industrial hemp plants are affected by different Australian weather conditions.

"This work includes finding the appropriate species for different regions to allow farmers to get the optimum crop yield. They are very hungry plants, which means they require lots of nutrients at the correct time and are also very thirsty,” Professor Florentine said.

“Although this is already known from overseas experience, Australian conditions present new production challenges – we have different pests and weeds, a range of soil conditions and localised issues with water and irrigation. These are critical concerns for economic production, and we need to know more about them and their effects on hemp crops before we can establish a viable industry." Professor Singarayer Florentine

"An advantage of creating an industrial hemp industry is that in many ways, these plants tick many boxes for farmers in this time of environmental concern. They contribute to carbon sequestration in the soil, they will be part of the circular economy, and being a short-term crop, they could fill the current void experienced by some farmers since they can be grown between other seasonal crops.

"However, farmers already want to know what will happen to the nutrients in their soil if they introduce these plants – will mixing these plantings affect the crops that they usually grow, which are known to be stable economic investments?"

Federation University's research team is working with farmers in the Ballarat area and Barham in the Riverina district of New South Wales. This work has already completed early-stage trials of a range of plant variants to assess their suitability. The researchers are examining six varieties of seeds in conjunction with local farmers to determine the optimum water and nutrient requirements and understand various ecological aspects of grain quality.

Professor Florentine indicated that Australian researchers would be tapping into the outcomes of work done overseas by looking at the available results of previous research.

"There are many varieties of industrial hemp, and every country or region has its specific climatic conditions. We will be able to use some of the agronomic knowledge that those countries have generated and apply it here, helping us determine which varieties might be suitable to fit into the Australian context."

Menzies Oration Series presents, Do I have a future? A better deal for young people in Australia

VIDEO  Federation University co-hosted the 2022 Menzies Foundation Oration 'Do I have a future? A better deal for young people in Australia'.

Harnessing the power of many

CeRDI has been instrumental in a citizen science project monitoring the 150g migratory shorebird known as Latham’s snipe. Now it is also assessing the value of the urban wetlands the bird uses.