A Federation University Australia researcher has joined an international effort to protect the pangolin, considered the world’s most trafficked animal.

Associate Professor Wendy Wright, from the School of Health and Life Sciences, has co-authored a chapter in a recently released book, Pangolins: Science, Society and Conservation, which combines research from around the world on the mysterious mammals.

Little is known about pangolins. They are the only mammal with scales and they sleep underground in burrows. The nocturnal creatures feed on ants and termites which they extract from mounds with their strong claws and long tongues. There are eight different species of pangolins, found in India, China, Nepal, South East Asia and in some African countries.

The animals also are also very difficult to keep in captivity, adding to their intrigue.

“They're very unusual mammals because of their scales, which we normally associate with reptiles rather than with mammals. The scales are made of a substance called keratin, which is also what our fingernails are made up of.  The scales are used in traditional medicines and they are in high demand, which is why the pangolins are poached and traded,” Associate Professor Wright said.

“We really don't know very much about these animals. They eat ants and termites, like an echidna, and they use burrows, like a wombat. They are rarely seen so we don't know how many individuals use one burrow, how long they live or how much territory each animal requires.

“What we do know is that authorities across Asia and Africa seize many thousands of pangolins and pangolin scales each year from illegal wildlife traffickers.” Associate Professor Wendy Wright

Associate Professor Wright’s work in pangolin conversation began when she was working in Nepal with a PhD student. There she met one of Nepal’s leading authorities on pangolins, Ambika Khatiwada, from Nepal’s National Trust for Nature Conservation.

“I got talking to Ambika and he invited me to join a small group of Nepalese authors to write the chapter about Nepal’s pangolins for the new book, which includes chapters on each species and from each country in the pangolins’ range,” said Associate Professor Wright.

Associate Professor Wright said much of the wildlife conservation in Nepal is led by rural communities, rather than governments, and this was the focus of the chapter. 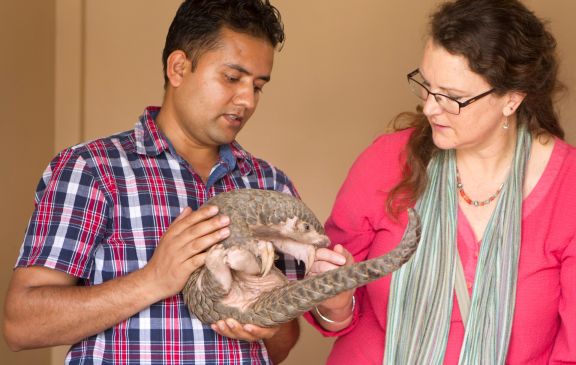 “The researchers are making good progress and this book brings together much of our current knowledge about pangolins globally,” Associate Professor Wright said.

“But challenges remain. Apart from their use in traditional medicines, poachers target the pangolins for their meat.”

“If we can educate local people about the benefits that pangolins bring to their communities, they may refuse to take the money that the poachers are offering. These very special animals are ‘ecosystem engineers’; they turn over the soil and make it  more productive.  Also, with the recent growth in ecotourism in Nepal, there is increasing recognition that pangolins could attract visitors, allowing local people to diversify their sources of income,” Associate Professor Wright said.

“Having local people involved in pangolin conservation will help stop poachers entering the villages and finding the animals, and increase the likelihood of reporting of poaching attempts.”