A Federation University Australia cardiovascular genomics researcher has been awarded a Victoria Fellowship to progress her research at the University of Manchester.

Priscilla Prestes, who is a Research Fellow in the School of Science, Psychology and Sport, focuses on high blood pressure and hypertrophic – or enlarged – hearts. It is hoped her research could eventually lead to strategies that would be used to prevent, treat or identify people at risk of developing those conditions.

Her fellowship is to continue her current research investigating circular RNAs – a novel type of RNA molecule – in the human kidney that can potentially be used as a biomarker for diagnostic or prognostic tools of high blood pressure and hypertrophic hearts, as well as molecular targets for the development of new anti-hypertensive treatments.

High blood pressure is the leading risk factor for heart disease in Australia, with an estimated 1.2 million people aged 18 years and over having one or more conditions related to heart or vascular disease, including stroke, in 2017–18, according to the Australian Bureau of Statistics.

“We have done a lot of work with animal models that can be translated to human research,” Ms Prestes said.

“So, we look at these components that we have identified in animals and we translate that back into the human data that we have. When we found that particular area in the genomic sequence, we looked at it in the human sequence using databases with human information and we found that – similar to the animal studies – people with an enlarged heart had that particular difference in that region.”

When travel restrictions allow, Ms Prestes will fly to Britain to continue her research at the University of Manchester. 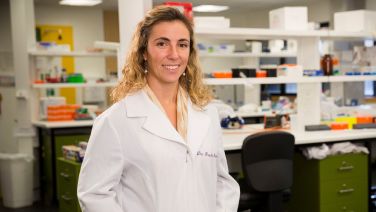 While there, she will use data available in a kidney tissue biobank from the TRANScriptome of renaL human TissuE (TRANSLATE) study and will bring newly developed techniques back to Australia.

“Circular RNAs are very underexplored as a whole molecule in the genome, and there isn’t a lot of available data related to heart disease. There have been some studies done in cancer but only very few. This is an area that is starting to draw a bit of attention because it’s so understudied,” Ms Prestes said.

“There are so many people worldwide where their current treatment for hypertension is ineffective and it doesn't matter what pills they take, how many, how often, and even if they take them as prescribed, they still have issues controlling their high blood pressure, so this could be a revolutionary molecule that could be targeted to potentially help these people that don't have a current effective treatment.

“It’s only a possibility at this stage, but it’s a promising one – we’re very hopeful.  And even if it doesn’t lead to a new treatment, we will greatly improve our understanding of how all these molecules are working together within a cell and may impact disease outcomes.”