High on a bookshelf in Peter Gell’s office sits an unremarkable chunk of red gum taken from the Murrumbidgee River.

The timber was found among old river gravels excavated for road works and sat ageing at the rear of a furniture store in Wagga Wagga. When the wood was carbon dated, it was found to be 6,300 years old.

For the paleoecologist and Professor of Environmental Science at Federation University’s School of Health and Life Sciences, finds like the red gum and those within the deep cores he regularly extracts from metres below the earth’s surface reveal the history of human impact on Australia’s ecosystems.

Professor Gell, who uses diatoms as indicators of present and past conditions, has been awarded the Hilary Jolly Medal for his outstanding contribution and excellence in research to Australian limnology by the Australian Freshwater Sciences Society.

His research takes him to coastal and other systems across the country, including the Murray Darling Basin, where he takes long sediment cores from wetlands. From these, fossil diatoms – single-celled algae – are studied under an electron microscope. The fossils give researchers a historical baseline for that system.

Professor Gell has secured ARC Linkage and government funding to analyse wetlands across the Murray Darling Basin and, along with 20 postgraduate and honours students, produced more than 60 publications on the river system. He has worked on lakes in Brazil and rivers in England and is an Adjunct Professor at Diponegoro University in Java where he collaborates on projects examining the impact of people on upland lake systems.

“While I was originally an ornithologist, a ‘birdo’, and continue the waterbird surveys for mining companies in a NSW lake that began in 1992, I've now principally moved into what's called paleoecology or paleolimnology, which looks at the history of wetlands over long periods of time,” Professor Gell said.

“Because I was a contemporary ecologist, my interest in the paleo is not in millions of years of change, but in the last 500 years or so because land managers’ eyes tend to roll when you talk about multiple thousands of years. But if you can give them 200 or 300 years of pre-European context to understand the full suite of impacts Europeans have had on our systems, they can take that in.

“So we try to focus in on culturally relevant timeframes in terms of European impact on our natural systems, both climate and direct, with catchment changes.”

Out in the field, Professor Gell will look for a site that has accumulated a continuous sequence of sediments.

He recalled a conversation several years ago with an archaeologist at Mildura who mentioned that she had come across a site that could be of interest.

“We began with a corer over our shoulder and at the start it didn’t look too promising. But we enlisted a couple of student helpers, put the core in and we just kept going and going. We extracted 4.6 meters of sediment. The basal age turned out to be 5,000 years,” Professor Gell said.

“Suddenly you've have discovered 5,000 years of continuous history, which reflects both how the rivers migrated or changed the water quality and how it's responded to big-scale climate changes. That was a real foundational study because we did not have a record of the system before to look at the history of salinity, for example.Professor Peter Gell

“We've now, with colleagues, put together over 60 of these records in the Murray Darling Basin and we're putting together these synthesis stories of where the permanent wetlands are and what proportion are only temporary and what the variability was like before European settlement.

“So I’ve published a synthesis showing 75 per cent of the wetlands that are now full were actually intermittent naturally and so perhaps some wetlands are given too much water and clearly some wetlands have not enough. So we need to take water away from some and give water to others.” 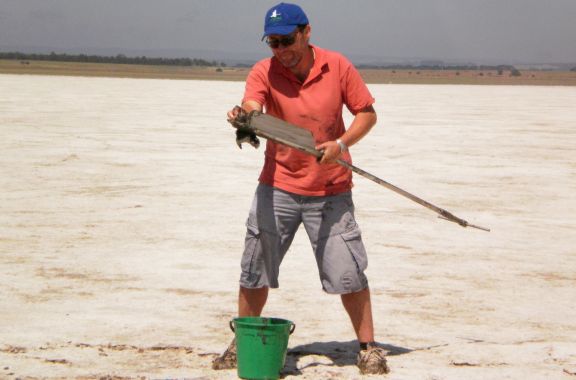 The restoration challenge for the Basin, Professor Gell said, was “not to throw water everywhere”, but to understand the dynamics of each system. The wetlands have been filling rapidly with sediment, and that has impacted aquatic plant life and habitat for fish.

“So we need to do more than just one thing, more than just focus on redeeming water but start trying to arrest 150 years of erosion in the catchment and switch off this other driver of degradation in the system,” Professor Gell said.

Professor Gell’s PhD work began at Paris-Sud University where he researched algal taxonomy and how to identify and use fossil algae.

He has been active in a research group called Past Global Changes, which is a Future Earth core project, contributing to the scientific steering committee of that for the last six years.

He has also led a global working group around transitions in aquatic ecosystems to bring together all the records from around the world to look at the first detectible point of human impact on a wetlands.

“So it looks at that time-transgressive effect of human impact in different parts of the world because they were all colonised at different times.

“So that's been a large part of my work for the last 10 to 20 years, bringing together these global working groups to synthesise these projects at a global scale, not just at the Murray Darling Basin or local scale.”