For a large contingent of Australian servicemen who served in World War I, the end to the conflict in November 1918 did not mean an end to their suffering on Europe’s battlefields.

More than 60,000 Australians were killed in the Great War, with most of the fallen soldiers buried at military cemeteries near where the forces had played a major role, including France and the Gallipoli peninsula. More than a century later, 18,000 still have no known grave.

An 1,100-strong group of men – mostly ex-veterans – joined the Australian War Graves Service (AGS), staying behind after the fighting stopped to locate, identify and then rebury the thousands who died. For many of them this meant another three years away from home.

Associate Professor Fred Cahir, from Federation University’s School of Arts, began researching the role of the AGS when he discovered his grandfather was one of the men who stayed behind.

“I developed a personal interest about a topic that I'd never known about and something that was so critically important for the five million Australians at home who were affected,” Associate Professor Cahir said.

“There were 60,000 deaths in a four-year time frame – it had an extraordinary impact on the entire Australian community at the time.”

The AGS was formed after a British decision to not allow what are now Commonwealth nations to repatriate their dead soldiers back to their respective countries. Many of the dead were taken from the battlefields and transported to cemeteries including Tyne Cot in Belgium, and to others including Fromelles and the Adelaide Cemetery at Villers-Bretonneux in France.

“Many of the veterans, including my grandfather, had been through literally four years of war themselves, starting at Gallipoli, the Western Front, seen the horrors of trench warfare, then volunteered to stay behind for a further three years,” Associate Professor Cahir said.

“In some instances, they would have to dig up their mates, identify them and reinter them which took an enormous emotional, physical and mental toll.”

The research project’s outcomes include a film documentary, digital gallery and educational package for school teachers across Victoria. He and a team of co-authors, including Dr Sara Weuffen from Federation University's Centre for Learning Innovation and Professional Practice, have also co-authored a book, published by Palgrave Macmillan, on the topic of the AGS.

He said he and his co-authors, some with family links to the detachment, had tried to discern what the motivational factors were to stay behind for the ghastly work.

“A sense of survivor guilt may have played a part in it,” Associate Professor Cahir said.

“The sense of mateship also comes through, very strongly in some accounts, so some wanted to stay behind to take care of their mates. A sense of commitment to the Australian public comes through as well.

“You have literally hundreds of thousands of families who are searching for something visible. A photograph was taken of every single grave marker, where they could, so this was the only thing their families had to hold onto as a memory of their loved ones who died overseas in World War I.”Associate Professor Fred Cahir

Others joined the detachment without having fired a shot. With the war coming to an end, Australian Army volunteers were still arriving in Europe, expecting to take up arms as the Allies inched closer to victory. 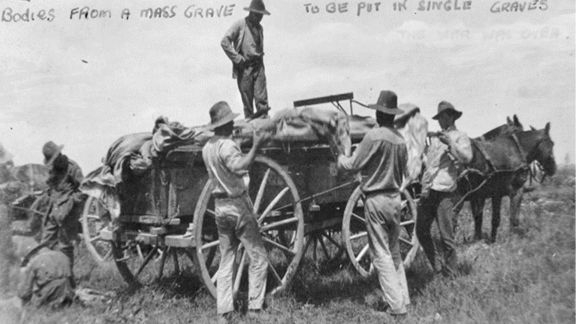 “You had these people who volunteered to fight in the war, they got over there to Europe when it had all but finished. Quite a few hundred of them were recruited out of ’okay, you're here now this is what you're going to be doing’,” Associate Professor Cahir said.

The detachment was limited to military personnel, preventing family members entering what had been the conflict zones. The fighting had stopped but the dangers remained.

“Mourning family members were barred from visiting because you're still in the battlefields. Part of the danger of the job was that there were gas canisters, bombs, hand grenades and live ammunition lying all around, and fatal accidents did occur,” Associate Professor Cahir said.

“The female involvement was quite prominent. There were a number of very courageous and very motivated women that went over there on their own finances in some instances to provide primary health care for the AGS workers and to take photographs for the mourning families back home. They were extremely gutsy.”

Despite the unpleasant nature of the work, Associate Professor Cahir said some of the processes put in place by the AGS were copied by other countries and were still used in modern-day natural catastrophes and war zones.

Associate Professor Fred Cahir, Dr Sara Weuffen and the Arts Academy’s Director, Associate Professor Rick Chew, are working in collaboration with Wind and Sky documentary film production company, along with their industry partners: the Shrine of Remembrance, the RSL, the Australian War Memorial and the Australian Red Cross on the documentary film project which will be launched at the Shine of Remembrance on 29 November 2019. The launch of the book, the digital gallery and the education package will occur in 2020.