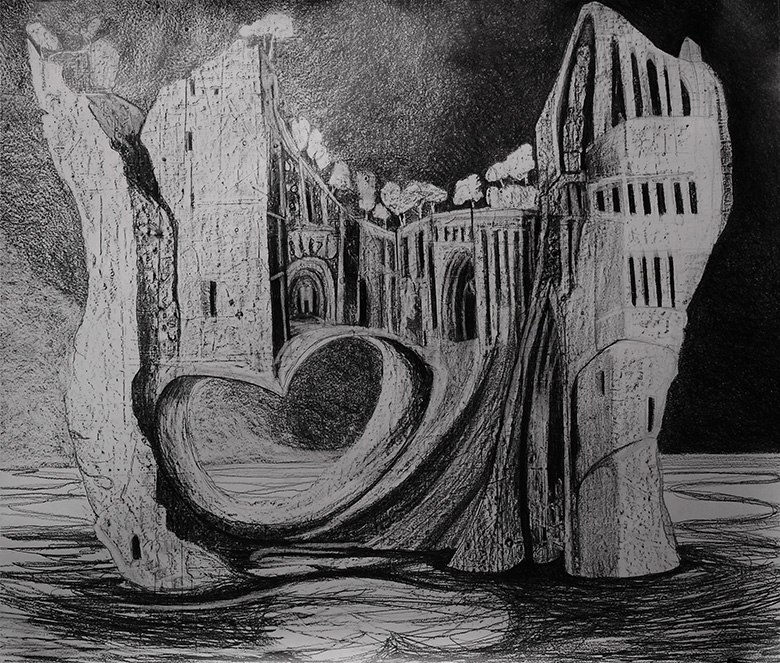 Stephen Davidson has an acute interest in how we value and define home and the notion of ‘being’ and belonging. Memory and migration, the land, the journey, traces of human history and the way in which identity is irrevocably tied to place, continue to inspire and inform his artistic practice.

Growing up in the idyllic town of Grandview, Washington, USA, amid the lush and mountainous landscape of the Yakima Valley and then migrating to the flat arid landscape of Australia, has had a particularly significant impact on his life and sense of place and being. However, and importantly, a sense of place for Davidson relates not only to the physical landscape but also encompasses the psychological and the synaesthetic - a combination of senses which relate to movement, memory and imagination. He also has an intrigue with understanding the universe, infinity and deep space, the concept of time and travel and the notion of ‘the edge’ and ‘the vortex’ which have all been vital for him in contemplating life and that which may exist beyond our fragile, finite journey.

Stephen Davidson’s new body of work constantly poses the question “Where are we now?”, “Where do we want to be?” and “What will our legacy be after we have gone?” His marooned, rocky island outcrops which stand isolated, devoid of life, lapped by the changing tides, bear witness to the wild, erosive natural elements of the sun, the wind and the sea but also bear testimony to the corrosive and neglectful results of human activity. In these works Davidson comments on his concerns for the future life of our planet and of once bucolic lands now barren. These seemingly post apocalyptic structures hint at lost worlds, once fertile, rich and habitable that now exist like reliquaries; the keepers of secrets and past histories of once proud kingdoms and lost empires. His ‘gutted’, ‘disembowelled’ and ‘barking mad’ structures with large voids, gargoyles and ghosted images of figures and faces loom out from fossilised surfaces suggesting the vestiges of warriors past, proud yet battle worn.

For the last 19 years, Davidson has travelled extensively across the globe and drawn inspiration from diverse sites such as ancient caves of China, to Roman ruins and the deserts of inland Australia. Despite his broad travel experiences, for him, a nineteenth century black and white steel engraving titled ‘Cottage Devotion’ by the Scottish artist Thomas Fayed is a relic from his past that continues to be a nostalgic and fond reminder of home. Lodged firmly in his childhood memory, the work presents a humble domestic scene of an English family gathered around the kitchen table. Seated near the window, an older man leafs through a bible, while two women and another man appear to be in a state of prayer. In the cosy, yet solemn devotional scene and central to the work is an innocent young boy who sits at the feet of the adults, cuddling a puppy and oblivious to the activity above.

Perhaps a time capsule or relic of Davidson’s personal history, ‘Cottage Devotion’ nonetheless stands as a significant symbol of what was, treasured from another time and place and a remnant of history passed on. Essential here is understanding the symbols which evoke meaning, the importance of a sense of belonging and the way in which identity is irrevocably tied to place - the invisible hinge by which we are all inexorably linked. Essential too, according to Davidson, is the evidence that whether we value the land or the institution of family and home or choose to ignore it, no doubt this will be our legacy for the future.