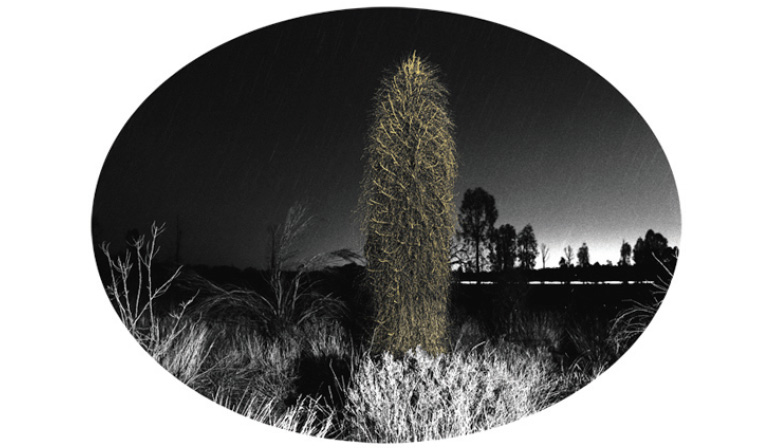 “Imagination is a tree. It has the integrative virtues of a tree. It is root and boughs. It lives between earth and sky. It lives in the earth and in the wind. The imagined tree imperceptibly becomes the cosmological tree, the tree which epitomizes a universe, which makes a universe.”

As an environmentally concerned artist, the most recent work of Louise Fowler-Smith focuses on the veneration of trees, a subject she was drawn to not only for the magnitude of its environmental significance but also its universal and pan-religious symbolic importance. Louise’s investigation and resultant work has spanned two continents, Australia and India.

This exhibition concentrates on images of trees found predominantly in the arid zone of far western NSW, where she has paid particular interest to trees and bushes such as the Mulga, with its umbrella like form and isolated existence. To date the photographs she has taken are always of singular, lone trees, which, through her manipulation and placement, she manages to imbue with a poetic resonance. Her process is similar to that of a painter, whereby she layers or glazes light onto specially chosen trees, that may otherwise have been disregarded and ignored; concentrating on its individual qualities or personality. This process draws out the tree, making it special, individualistic, even sacred.

Her work focuses on notions of perception and in the belief that depending on the way we perceive and contemplate the land, this affects how we treat it and ultimately live within it. She believes that we are less likely to honour and respect the land if we see it as separate from ourselves. This perception remains pertinent irrespective of how the land is ideologically managed across cultural divides.

Over the past 6 years Louise has also been travelling across India, photographing how trees are decorated as an act of veneration or worship and interviewing people in the field. She was attracted to the venerated tree in India not only for its enchanting beauty, but its ability to protect trees from loggers.

As a result of this research, she is compiling a book that presents a visual record, along with data, of how the tree is decorated across contemporary India, and how this practice has the ability to protect the tree.

Her article titled Hindu Tree Veneration as a Mode of Environmental Encounter was published in the February 2009 issue of Leonardo - The Journal of the International Society for the Arts, Sciences and Technology - Volume 42, Number 1. https://doi.org/10.1162/leon.2009.42.1.43.

Louise is employed as a Senior Lecturer at the College of Fine Arts, UNSW, Sydney and is the Director of the Imaging the Land International Research Institute (ILIRI), which aims to promote new ways of perceiving the land in the 21st century. She has established the ILIRI ‘Creative Laboratory’ – a large area of land at Fowlers Gap where artists, architects, scientists - people concerned with the environment – can collaborate on projects that explore new ways of perceiving, interacting and living in a land starved of water.